Provide a report on UK ISPs and their eligibility for acquisition.

Paola and Frank provided a research report on UK Internet Service Providers to a public telecommunications company; they required a list of recommended ISPs to consider for investment in the UK. They found out about us from Paola's UK & Irish Internet Company Directory.

Starting with a list of about 400 UK Internet access providers, we eliminated those companies which did not meet our client's core criteria. For the remaining 20 companies, we collected information from various sources, designed a telephone survey to gather in-depth information and hired someone to run it.

The resulting 80-page report and analysis contained a short-list of eleven candidate companies and we were subsequently commissioned to prepare two in-depth reports of UK companies.

The company was a small public (US - NASDAQ) company with specific infrastructure - backbone and CLEC - properties in various places in Europe. They were in the process of raising additional funding in order to move into the ISP business in a bigger way.

The central European and UK surveys were done in parallel. Both kicked off with a half-day workshop run by Paola at the client company to discuss and agree the survey questions.

Starting with a list of about 400 UK Internet access providers, we eliminated those companies which did not meet our client's core criteria. For the remaining 20 companies, we managed a telephone survey to gather in-depth information.

The resulting 80-page report was split into an overview, a one-page analysis, 3-page of company summaries, comparison tables, company detail and supporting materials in an appendix.

We created a one-page overview comparison table called the UK ISP company league table. To make it, we applied a score value between zero and five to every company's answer in relation to our client's core criteria. Companies were then ranked on the total.

A few weeks after we had delivered this report report, we were given a few days to prepare a paper on just one of the UK companies. We researched and wrote the 14-page report.

We were then asked to provide an in-depth report on nine of the UK companies considering a different set of issues, such as sales and marketing skills. The resulting 33-page report was delivered two weeks later. It followed the structure of the original report by describing the research method, displaying information in a comparison table, company summaries and detail.

GTS eventually purchased a UK ISP and a number of eastern European ISPs and was itself acquired by a leading pan-European data communications company in 2002. 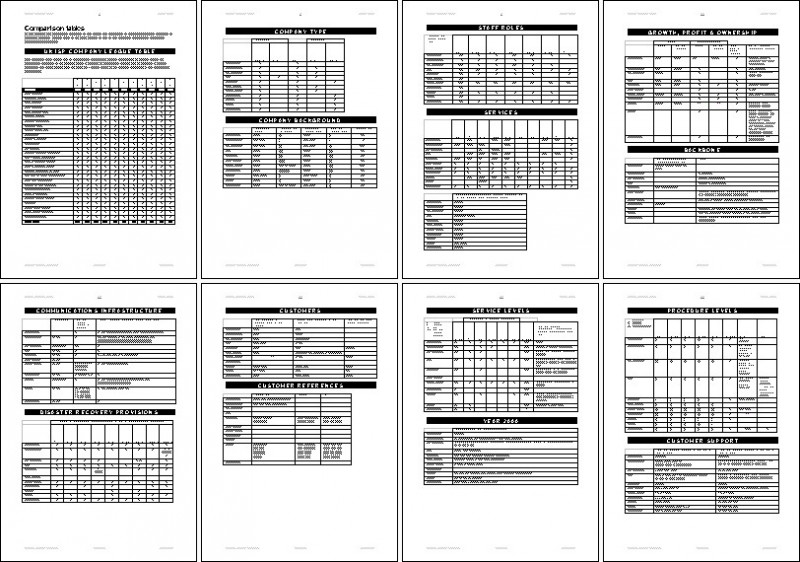 Information and survey results on a company 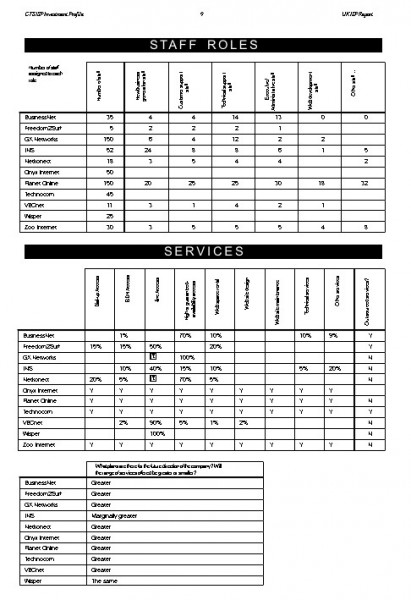