PPIG is a friendly and informal group with members from all over the world. Its annual workshops have taken place in France, Belgium and Italy as well as around the UK.

During that time, the site went through three redesigns and documented PPIG's annual workshops.

The site was redesigned in 1996 to make use of the latest HTML standard, such as the addition of background colours.

Pages used a pinkish-brown background. The home page featured a pig's head in the style of a phrenology diagram, page headings were implemented as graphics with different shapes and the site navigation was in the page footers. 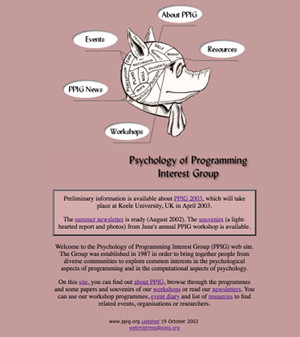 Paola redesigned the site again at the end of 2002 before handing it over to the new maintainer: 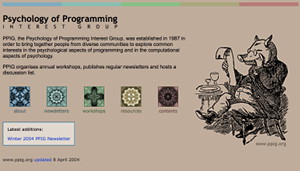 The new navigation panel included the site name in text, the section links as combined graphical button and text label, a link home and a colour-coded section graphic. In this panel and the breadcrumbs, the HTML links were in the section colour.

The mark-up style allowed the whole page to become very condensed without the need for horizontal scrolling (335 pixels). This is useful in high-resolution environments where multiple browser windows are not uncommon, and also on devices with smaller screens, such as PDAs.

Besides the public pages, the PPIG web site included a private section describing guidelines for people who want to submit material to the site.

Paola also provided an illustrated manual for the new maintainer in web form. It covered topics such as the house style, mark-up conventions, stylesheets, button states and graphics.

I redesigned and rebuilt the the web site for the Psychology of Programming Interest Group with the content management system, Drupal.

I copied over 25 years of content into new content types. I split decades of newsletters into sections and indexing them to maximise findability. I also added new sections, such as an event diary and a searchable bibliography. The site is the world's leading resource for the psychology of programming. 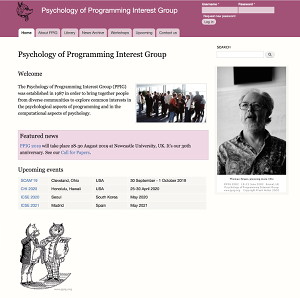 The two PPIG mailing lists, announce and discuss, have been active since 1996. Paola administers and moderates both of them. 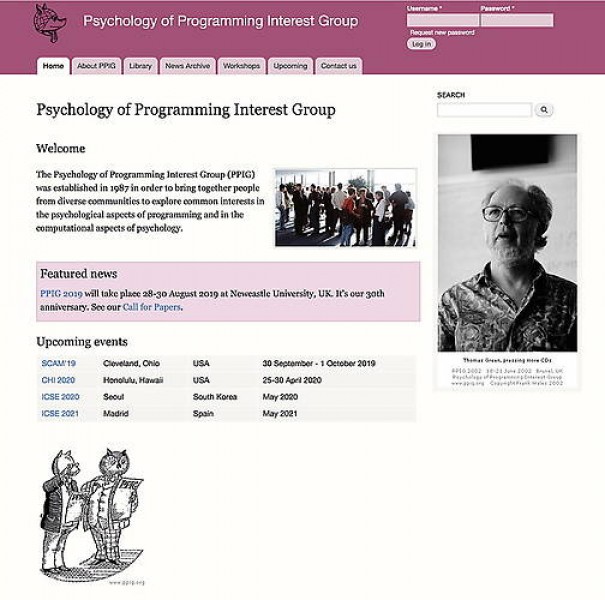 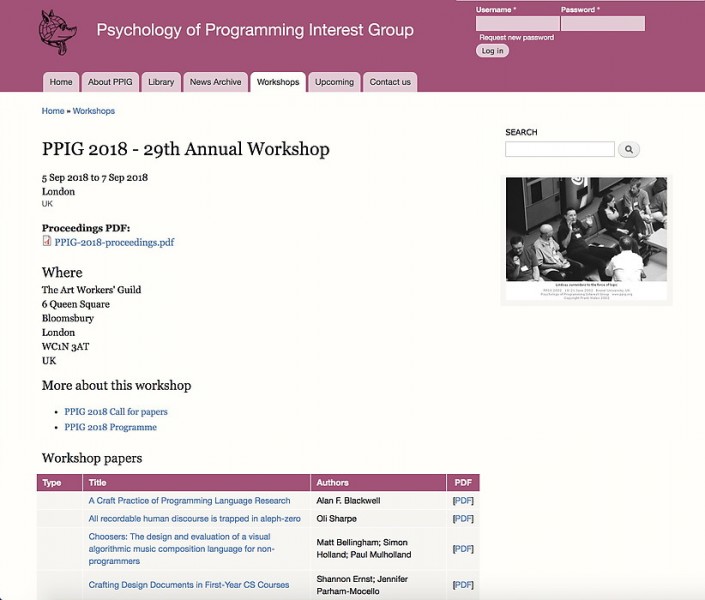 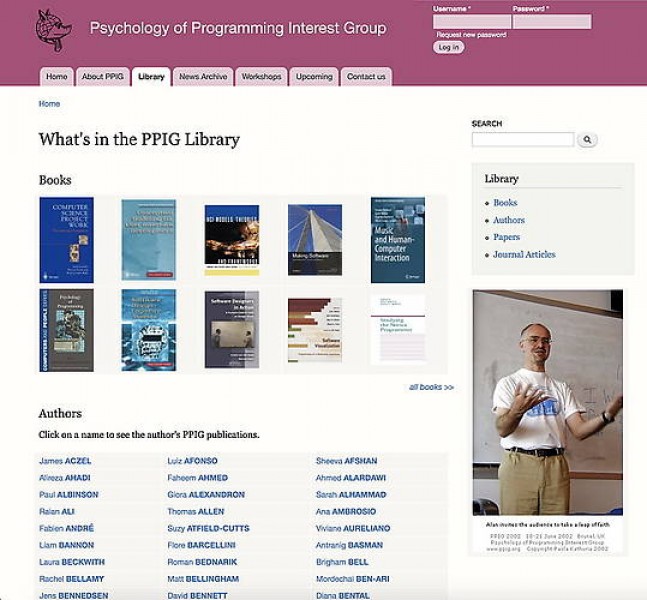 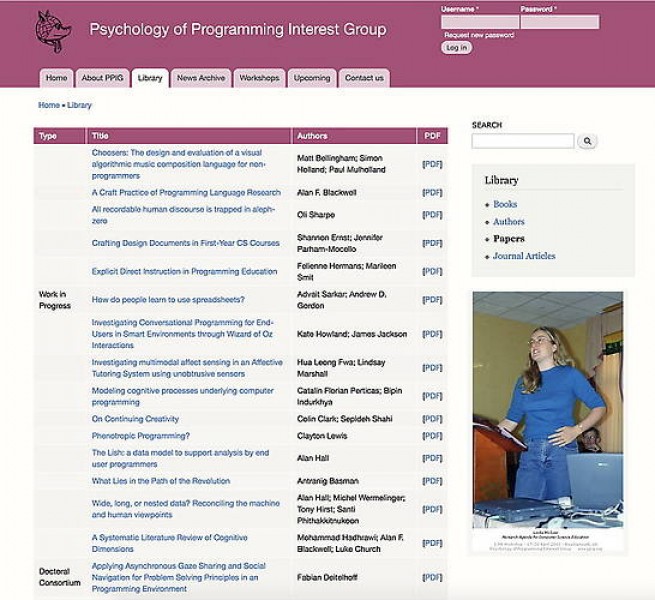 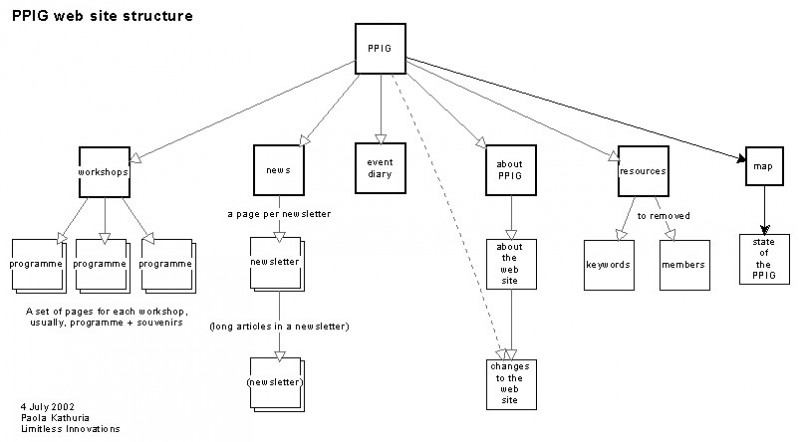 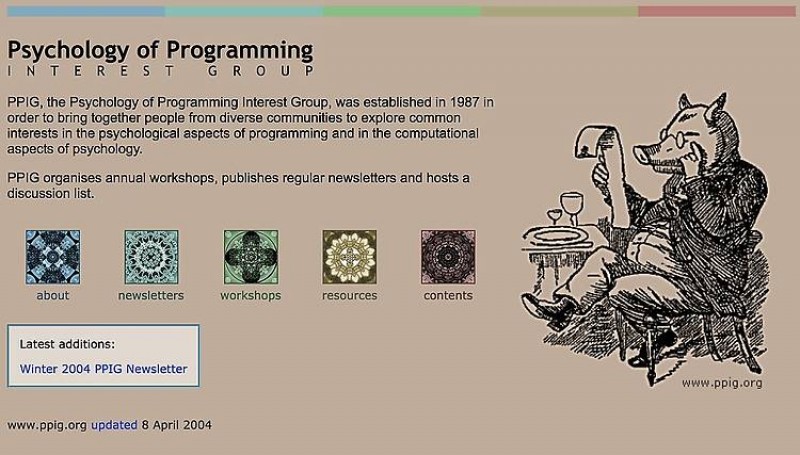 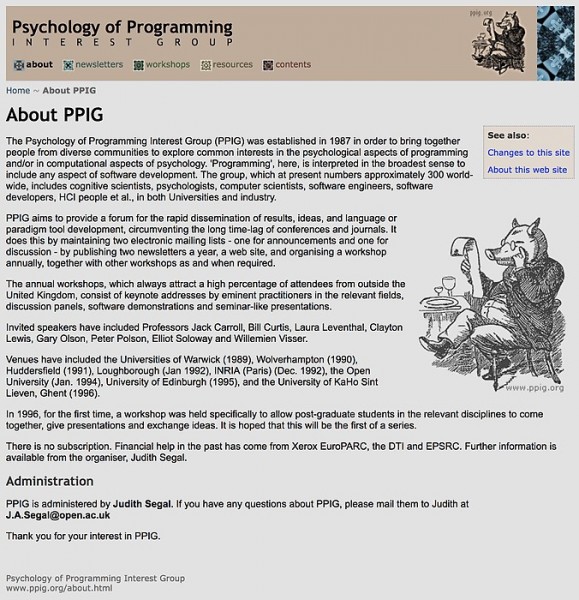 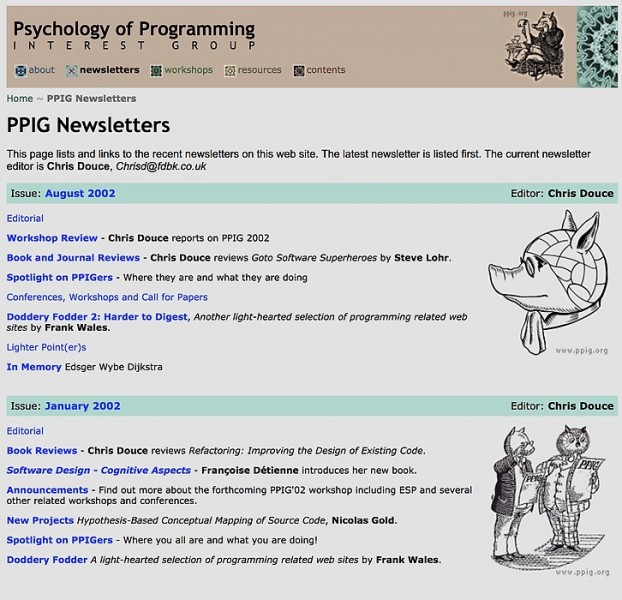 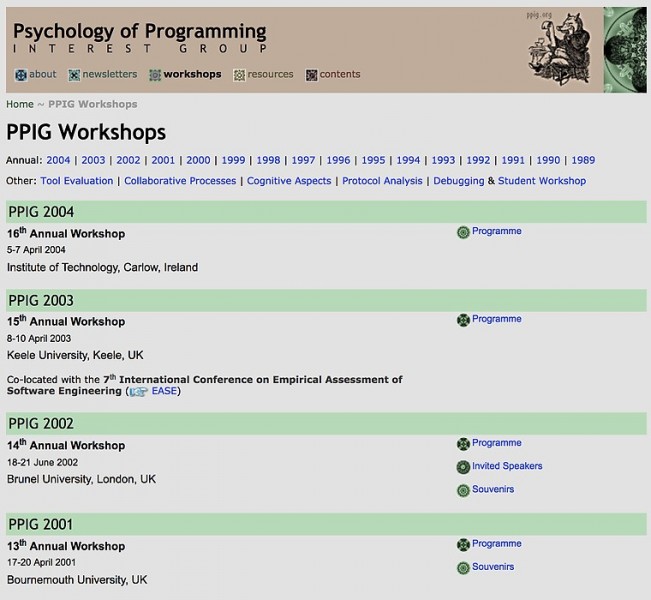 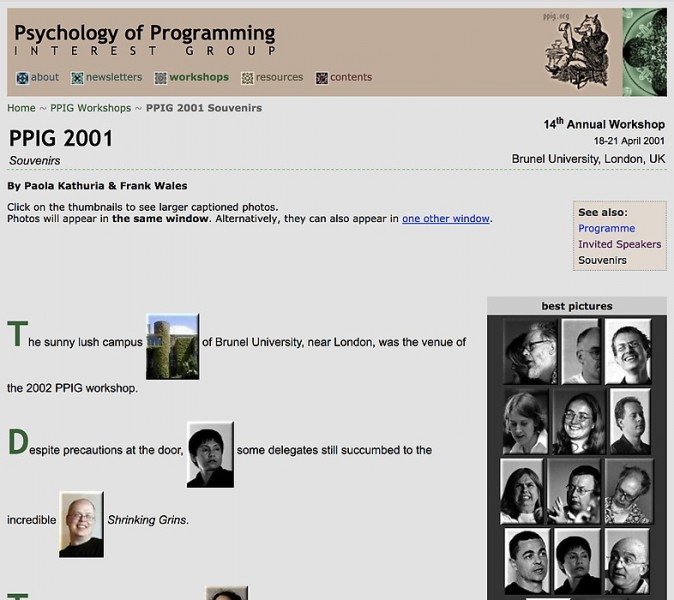 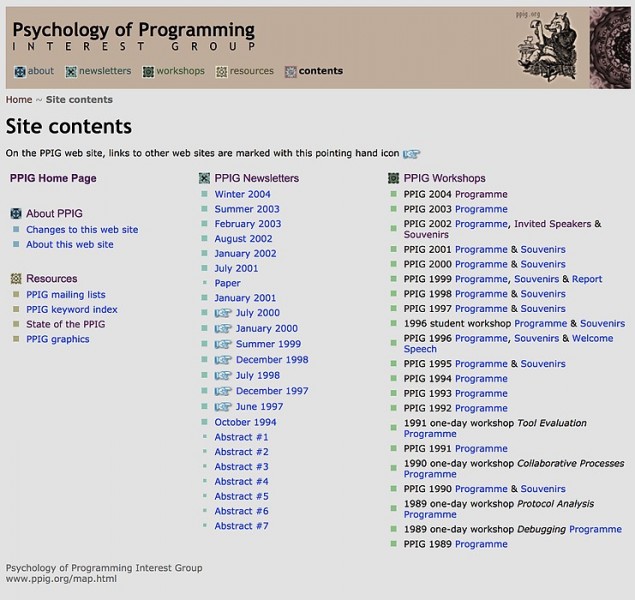 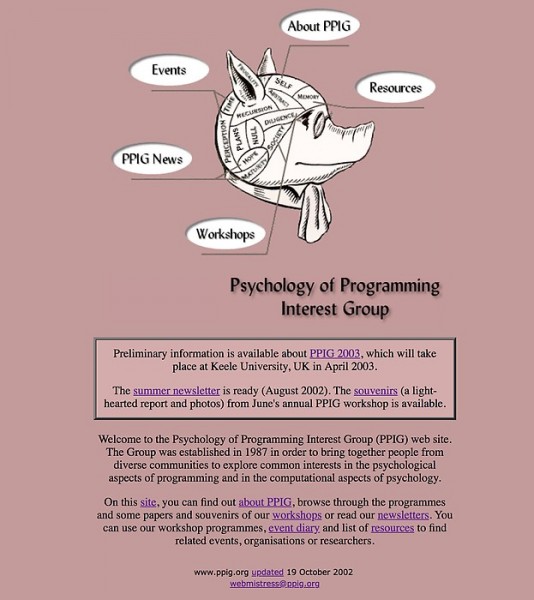 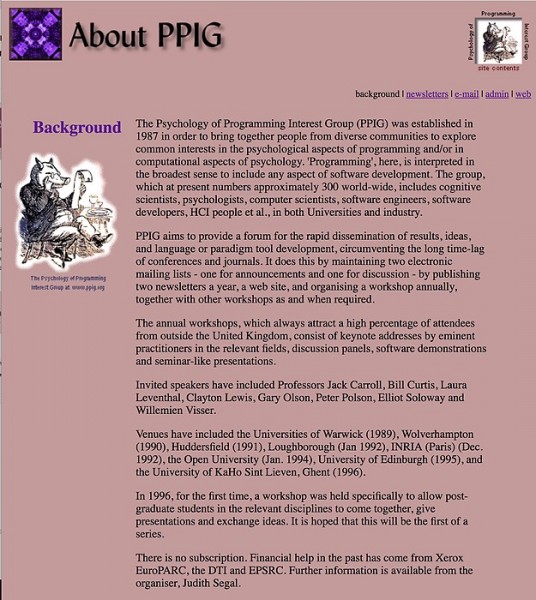 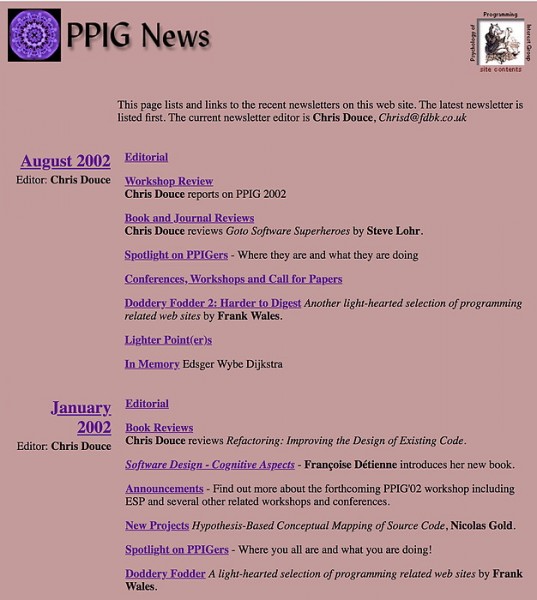 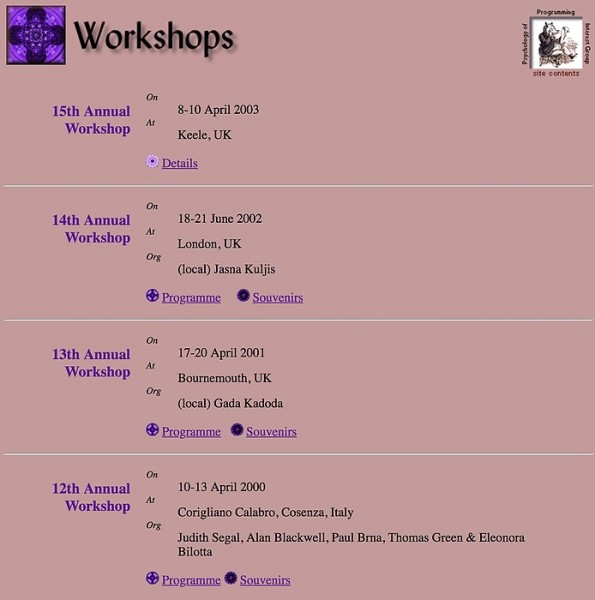 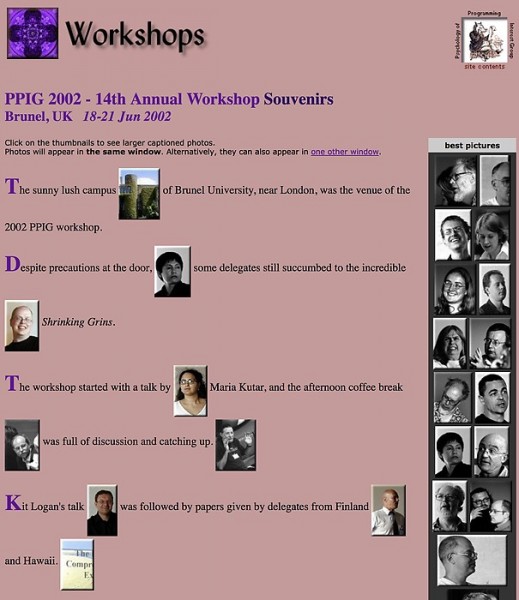