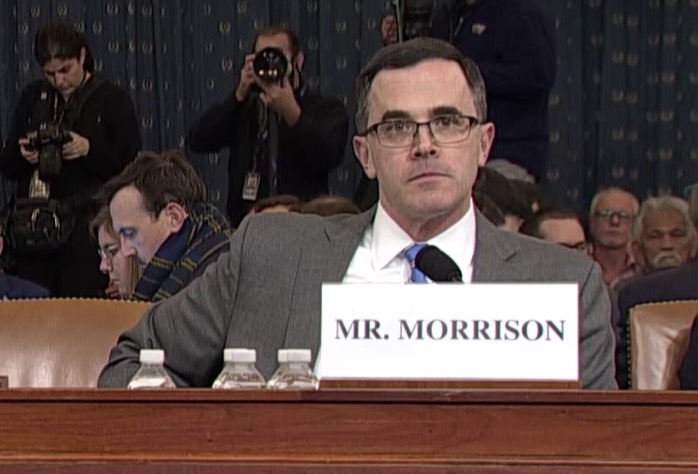 In July 2019, he replaced Dr Fiona Hill as the top adviser to President Trump on Russia and Europe.

In his opening statement to his deposition on 31 October 2019, Tim Morrison said:

Watching his testimony in the impeachment hearings on 19 November 2019, it seems to me that one can interpret Tim Morrison's testimony differently: taking actions to protect the President.

Overview: "I was not concerned that anything illegal was being discussed" 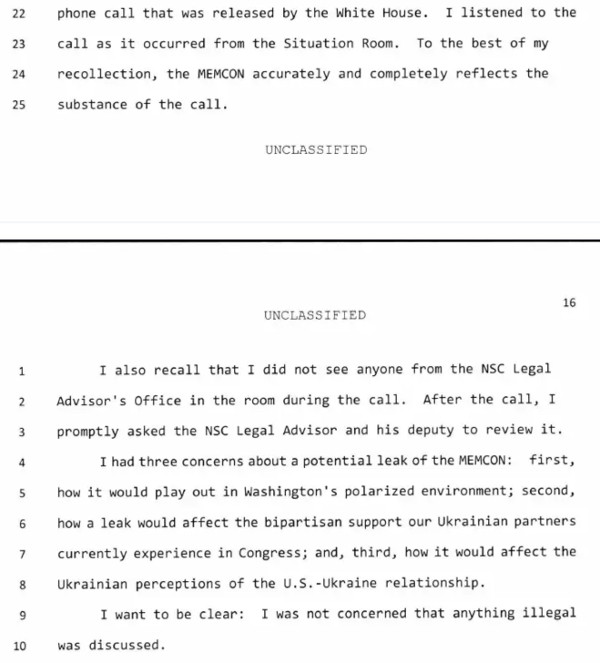 In Tim Morrison's opening statement in October, he said:

I listened to the call as it occurred from the Situation Room. To the best of my recollection, the MemCon accurately and completely reflects the substance of the call.

I also recall that I did not see anyone from the NSC Legal Advisor's Office in the room during the call.

After the call, I promptly asked the NSC Legal Advisor and his Deputy to review it.

I had three concerns about a potential leak of the [Memorandum of Conversation]:

first, how it would play out in Washington's polarized environment;

second, how a leak would affect the bipartisan support our Ukrainian partners currently experience in Congress;

and third, how it would affect the Ukrainian perceptions of the U.S.-Ukraine relationship.

I want to be clear, I was not concerned that anything illegal was discussed.

However, Fiona Hill warned Morrison that Sondland & Giuliani were focussed on in Burisma & 2016 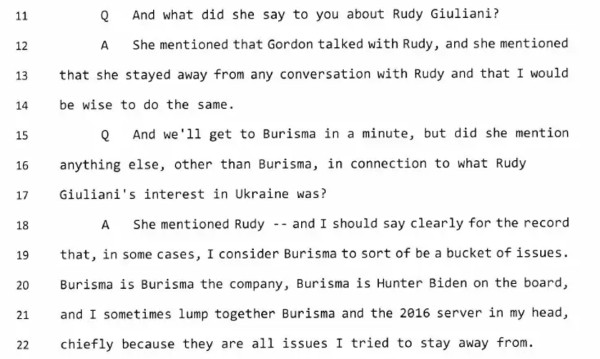 During the deposition he said that during hand-off conversations, Dr Fiona Hill, who Tim Morrison was replacing, warned him about Ambassador Sondland who was working with Rudy Giuliani on Burisma.

I should say clearly for the record that, in some cases, I consider Burisma to sort of be a bucket of issues. Burisma is Burisma the company, Burisma is Hunter Biden on the board, and I sometimes lump together Burisma and the 2016 server in my head, chiefly because they are all issues I tried to stay away from. 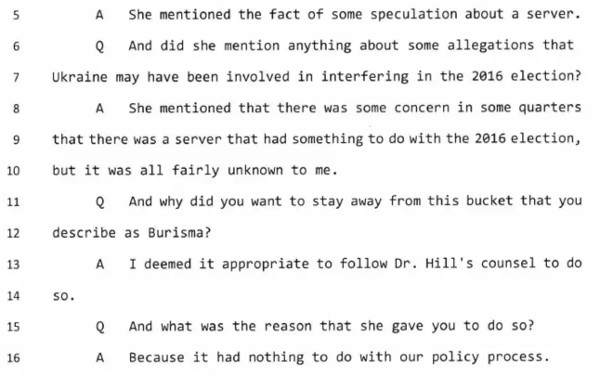 When asked "why did you want to stay away from this bucket you describe as Burisma?",

I deemed it appropriate to follow Dr. Hill's counsel to do so.

"And what was the reason she gave you to do so?"

Because it had nothing to do with our policy process. 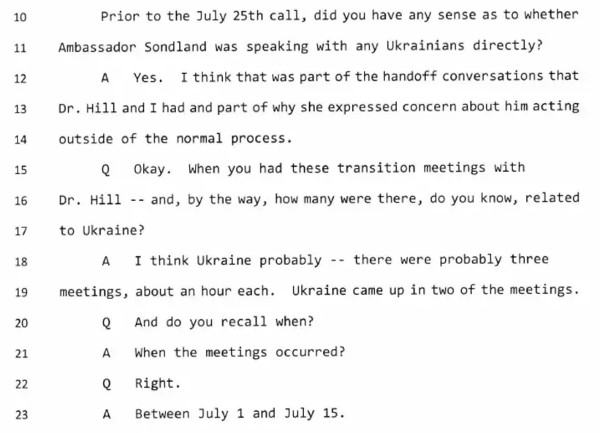 She stated that Ambassador Sondland believed he had the mandate to get involved [in Ukraine policy] based on his relationship with the President.

It was [....] more about how he conducted himself. He did not participate in the process. So we are very process-oriented on the NSC; we have a way we do things that works. And so when people come in and get involved in issues and they’re not of that process, it creates risk.

Morrison was asked, "Prior to the July 25th call, did you have any sense as to whether Ambassador Sondland was speaking with any Ukrainians directly?"

Yes,. I think that was part of the hand-off conversations that Dr. Hill and I had and part of why she expressed concern about him acting outside of the normal process.

And Morrison knew that Sondland had briefed Trump before the call 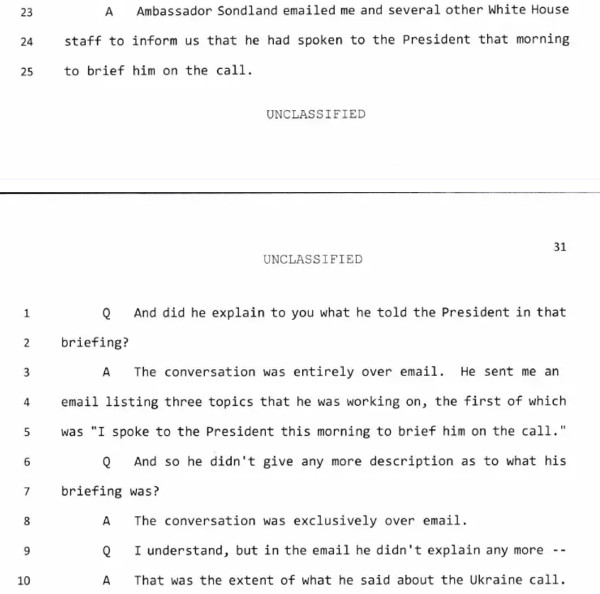 Ambassador Sondland e-mailed me and several other White House staff to inform us that he had spoken to the President that morning to brief him on the call.

From the 19 November 2019 impeachment hearing:

And Morrison was concerned that Zelensky was obsequious during the call

"So, as you were listening to the call, did there come a time when you became concerned about anything that you heard?"

I was concerned about how President Zelensky was talking to President Trump. I found it obsequious.

I heard issues related to the server. And I was concerned that Dr. Hill was correct about this parallel process [involving Sondland & Giuliani].

And I grew concerned that the call was not the full-throated endorsement of the Ukraine reform agenda that I was hoping to hear.

But Morrison thought that what Trump asked wasn't a concern 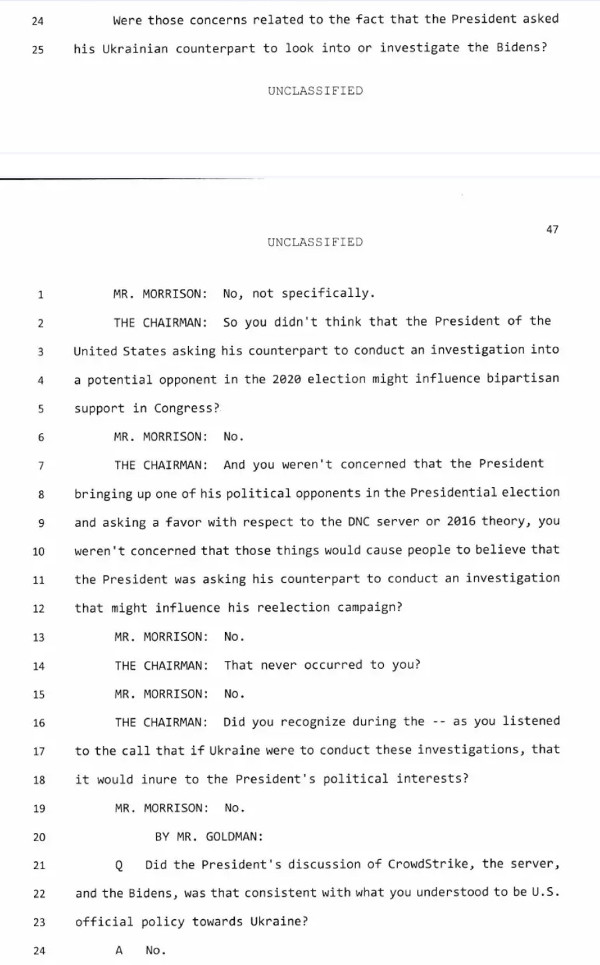 "Were those concerns related to the fact that the President asked his Ukrainian counterpart to look into or investigate the Bidens?

"So you didn't think that the President of the United States asking his counterpart to conduct as investigation into a potential opponent in the 2020 election might influence bipartisan support in Congress?

"That never occurred to you?"

Do you recognize during the -- as you listened to the -- that if Ukraine were to conduct these investigations, that it would inure to the President's political interests? 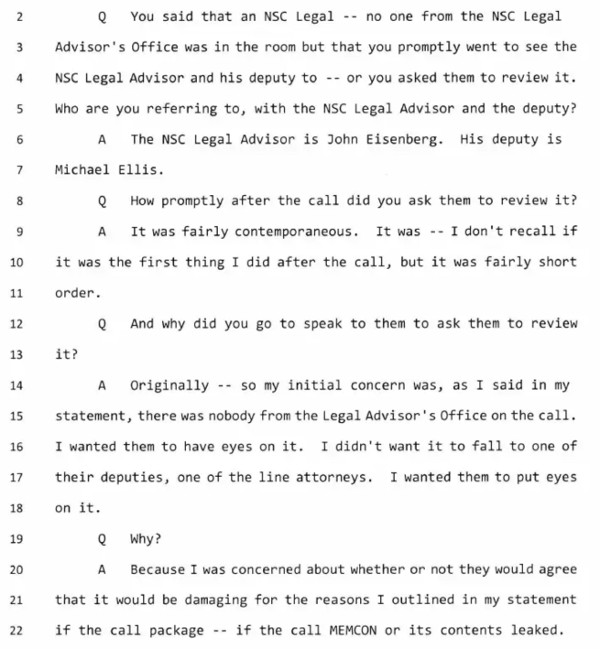 "Why did you go to speak to [NSC Legal Adviser's Office] to ask them to review [the call]?"

Originally -- so my initial concern was, as I said in my statement, that there was nobody from the Legal Adviser's Office on the call.

I wanted them to have eyes on it.

I didn't want it to fall to one of their deputies, one of the line attorneys.

I wanted them to put eyes on it.

Because I was concerned about whether or not they would agree that it would be damaging for the reasons I outlined in my statement if the call package -- if the call MemCon or its contents leaked.

However, Morrison does admit to connecting the call with what Fiona Hill had warned him about

Dan Goldman, the Democrat's counsel says "So just to make sure I understand this correctly, Mr. Morrison, you heard the call, you recognize that President Trump was not discussing the talking points that the NSC had prepared based on official U.S. policy and was instead talking about the investigations that Fiona Hill had warned you about, and then you reported it immediately to the NSC legal advisor. Is that the correct chain of events here?" 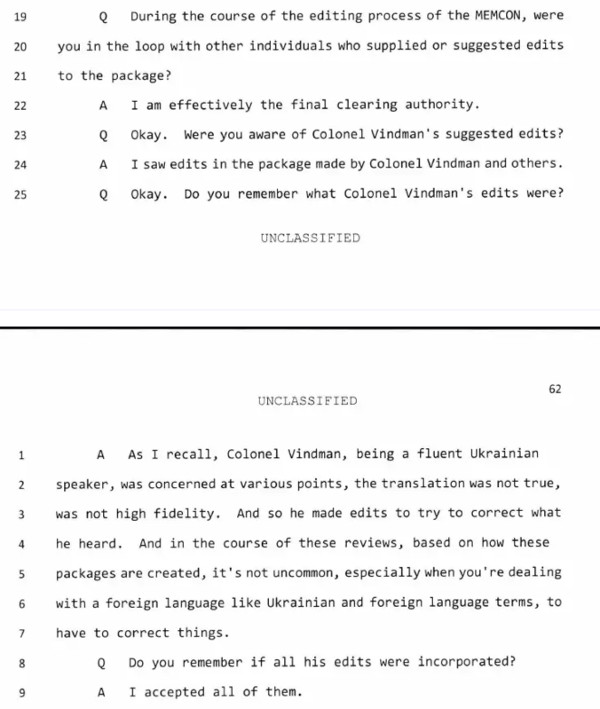 "During the course of the editing process of the MemCon, were you in the loop with other individuals who supplied or suggested edits to the package?"

I am effectively the final clearing authority.

"Okay. Were you aware of Colonel Vindman’s suggested edits?"

I saw edits in the package made by Colonel Vindman and others.

"Okay. Do you remember what Colonel Vindman’s edits were?"

As I recall, Colonel Vindman, being a fluent Ukrainian speaker, was concerned at various points, the translation was not true, was not high fidelity. And so he made edits to try to correct what he heard. And in the course of these reviews, based on how these packages are created, it’s not uncommon, especially when you’re dealing with a foreign language like Ukrainian and foreign language terms, to have to correct things.

"Do you remember if all his edits were incorporated?"

I accepted all of them

At the 19 November 2019 impeachment hearing:

Devin Nunes says, "Colonel Vindman did articulate that he had a couple edits. He wanted Burisma inserted, I think it was on page three, or four, in place of “the company”, in one of the sections where President Zelensky was talking. Are you aware of that edit request?"

I understand that he said in either this proceeding, or the deposition that he wanted that request, yes.

"Okay. At the time, did you understand that he had asked for that?"

I don’t recall that. It was my practice if I believed an edit accurately represented the call, I would accept it. If I didn’t hear it in the call, if it didn’t exist in my notes, I wouldn’t have made the edit.

Later, Brad Wenstrup says, "Lieutenant Colonel Vindman came to you with edits for the transcript. And you stated that you accepted all of his edits. Is that correct?

I would have accepted all of the edits that I believed were faithful to what was actually discussed.

At the impeachment hearing with Alexander Vindman and Jennifer Williams earlier that day:

Adam Schiff: Both of you recall President Zelensky in that conversation raising the issue or mentioning Burisma, do you not?

Schiff: And yet the word Burisma appears nowhere in the call record that’s been released to the public. Is that right?

Schiff: Do you know why that’s the case, why that was left out?

Williams: I do not. I was not involved in the production of that transcript.

Schiff: Colonel, you pointed out the fact that that word was used, did you not?

Schiff: And the edit was not included in the record released to the public?

Vindman: That’s right. I’d say it’s informed speculation that the folks that produced these transcripts do the best they can and they just didn’t catch the word. And that was my responsibility to then make sure that the transcript was as accurate as possible. And that’s what I attempted to do by putting that word back in because that was in my notes. 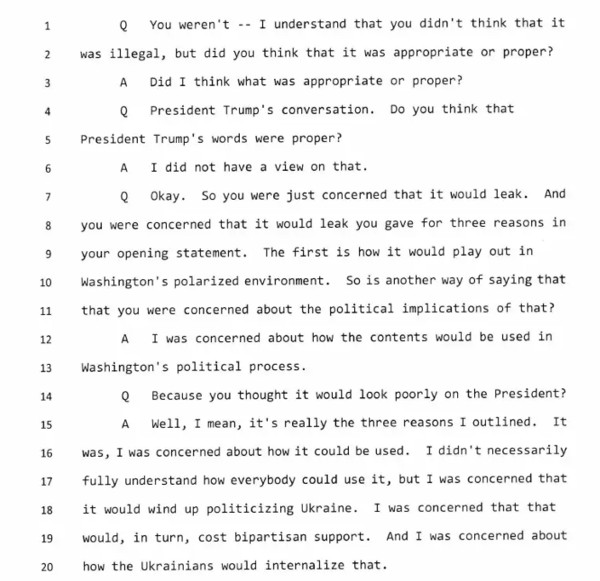 Tim Morrison does not explain what he means by his concern on how the contents if the call would be used in "Washington's political process."

He instead refers to his initial three reasons outlined in this opening statement:

"Do you think that President Trump's words were proper?"

I did not have a view on that.

I was concerned about how the contents could be used in Washington's political process.

"Because you thought that it would look poorly on the President?"

Well, I mean, it's really the three reasons I outlined. It was, I was concerned about how it could be used.

From the 19 November 2019 impeachment hearing:

Val Demings asked, "Why were you so concerned about the legal advisor being aware of this call that you saw nothing basically wrong with the substance or content of the call?"

"And what is it that you wanted them to be aware of, specifically?"

I wanted them to be aware of the call, because I wanted to know what had transpired.

"What concerned you to the point where you wanted them to know what had transpired that you went directly to legal counsel to inform them of?"

My equivalent, the head of NSC legal, was and is John Eisenberg. He was my equivalent in that position. I wouldn't go to somebody subordinate to him, I would go to him to express my concerns.

Was Tim Morrison being truthful when he said that Trump hadn't said anything wrong in his call with President Zelensky or Ukraine?

Did Morrison hear "Burisma" in the call but deliberately ignored Alexander Vindman's edit to replace "a company" with "Burisma"?

Does "Washington’s political climate" refer to the fact that there is a lot of negative reporting on Trump and that his impeachment had already been discussed?

Was he covering up for President Trump by restricting access to the call contents?

If I were Prime Minister