Paola Kathuria maintained the UK's official directory of UK and Irish ISPs and web companies from 1993 to 2000.

InetUK as a Usenet FAQ

InetUK started off as a periodical Usenet posting.

Usenet was a collection of thousands of subject-based discussion forums, called newsgroups. People subscribed to the newsgroups they were interested in. New posts in newsgroups would come to the reader on their machine.

InetUK started off as a periodical posting to the newsgroup uk.net. The first list was started in June 1992 by Craig Cockburn. A free-form version was started by Sunil Gupta in December 1992. Paola took over the maintenance and posting of the summary and long ISP directories in June 1993. 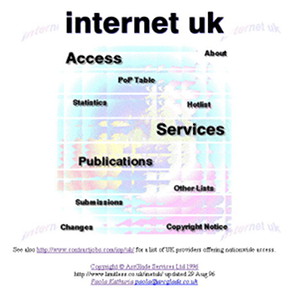 InetUK It soon became the FAQ for the newsgroup uk.net.

FAQs are compilations of information which are (usually) the result of certain questions constantly being asked (posted) in a newsgroup - hence the name FAQ (Frequently Asked Questions).

Many newsgroups had FAQs associated with them - be they about Terry Pratchett, cats as pets, cooking or the English language. FAQs were the Wikipedia of the time.

Paola maintained the FAQ in her spare time and there was no charge to be listed. She posted the InetUK FAQs to Usenet until February 1996. It was available on the web from June 1998.

The following graph shows the growth of Internet services in the UK and Ireland between 1990 and 1999.

It is based on information provided by the companies themselves and shows the number of active Internet companies by taking account the number of companies which stopped providing services. 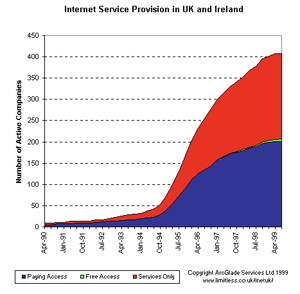 Since not all companies provided the date that they started providing Internet services, another - very loose - indicator of the growth of Internet access and service provision is the number of entries on the lists during the years.

Companies appeared on InetUK either because they sent Paola an entry or because she read about them in a magazine and added their contact details to the InetUK database. The big increase in August 1996 is due to actively looking for companies on the web, using Yahoo. Note that a company could have been providing services some time before they are included in this list.

How the InetUK format came about

The list started off as a free-form text blocks. After taking over the postings, Paola came across PDIAL, a list of publicly-accessible dial-up sites in the US. She adjusted the format to suit the UK market and started the Summary Access list in 1993.

In those days, many of the people were providing dial-up access on the back of existing BBSs, and PDIAL reflects this. 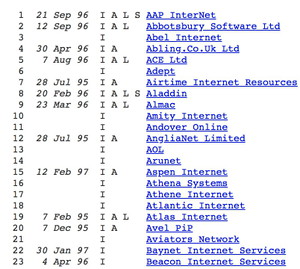 InetUK was originally maintained by hand but Paola soon added the information to an Omnis database. She wrote an application to generate lists as Usenet postings with the appropriate headers, as single files for putting on the ftp archives, as multi-part messages for people on the mailing list and then, later, notifications of updates for the people on the mailing list and, finally, web pages.

Up until October 1995, Paola was sending monthly reminders to companies to update their entries and to invite new companies to submit an entry. She did this by e-mailing companies their current entry and asking them to send it back, edited. This continued for a year, when it became too time-consuming.

In 1997, a journalist at the Financial Times asked Paola whether he could reproduce the ISP graph for an article. A manager at the Oxford University Press read the article, found ArcGlade's web site and asked us to help put the Oxford English Dictionary online.

In addition, we were invited by an international telecoms company to create and run telephone and online surveys of UK and European ISPs with respect to acquire an ISP. 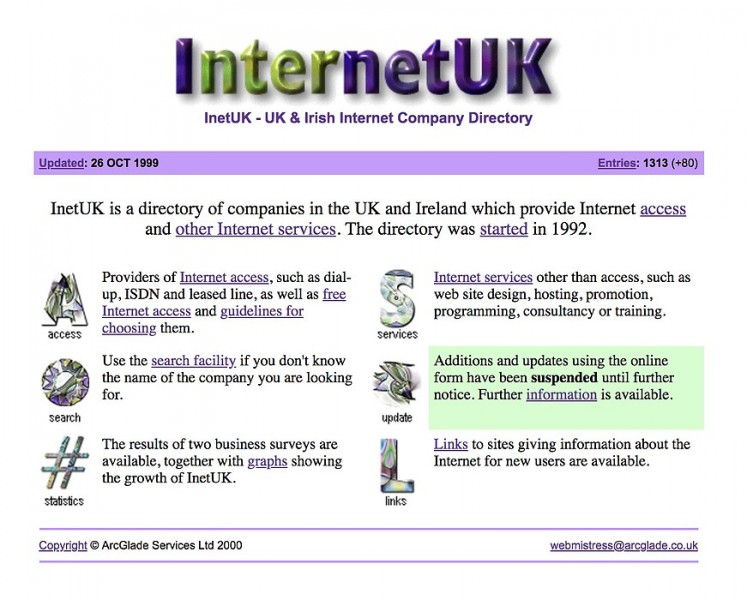 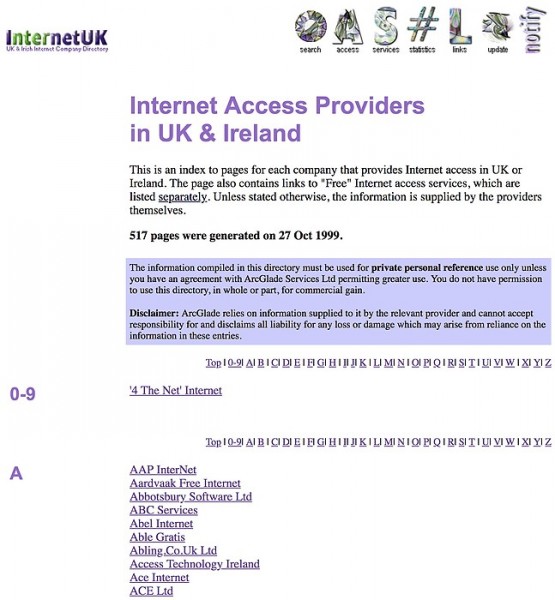 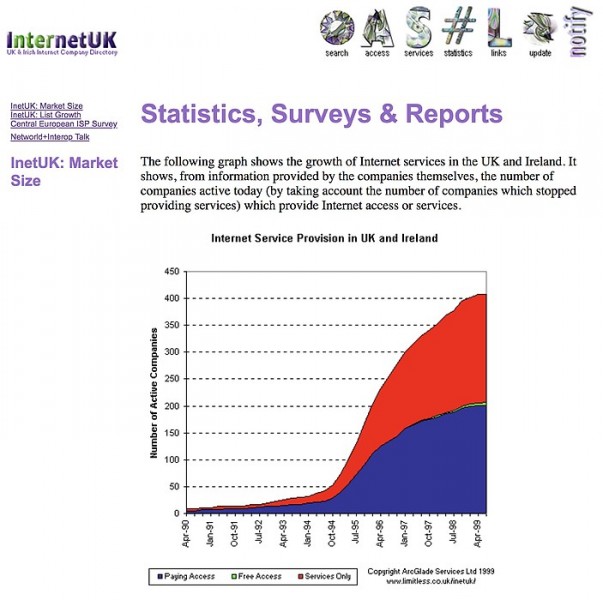 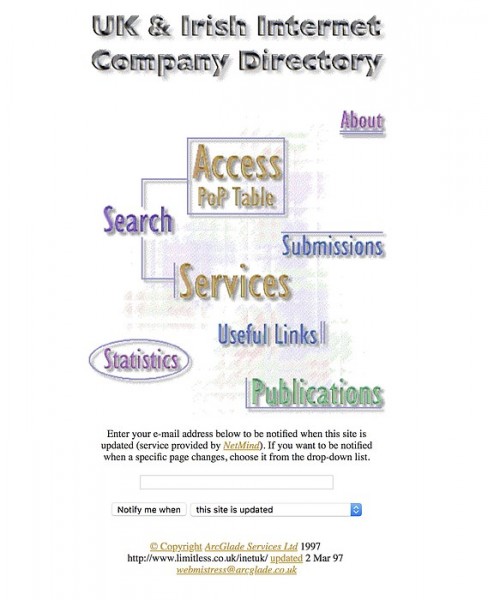 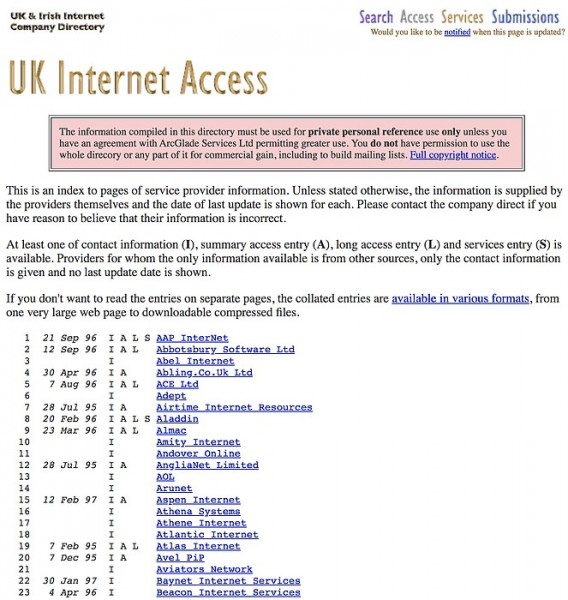 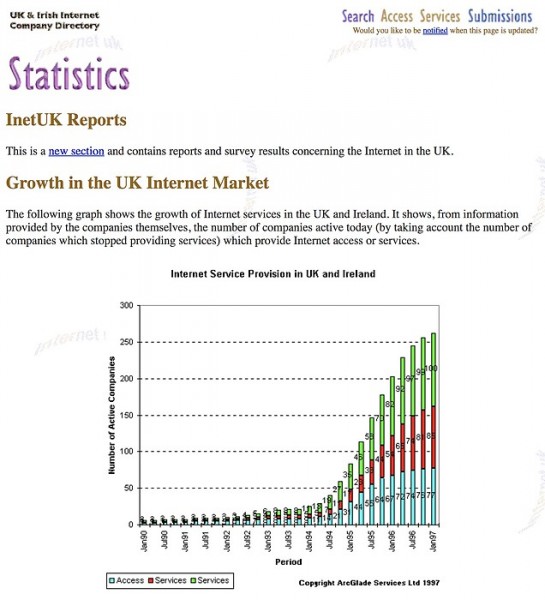 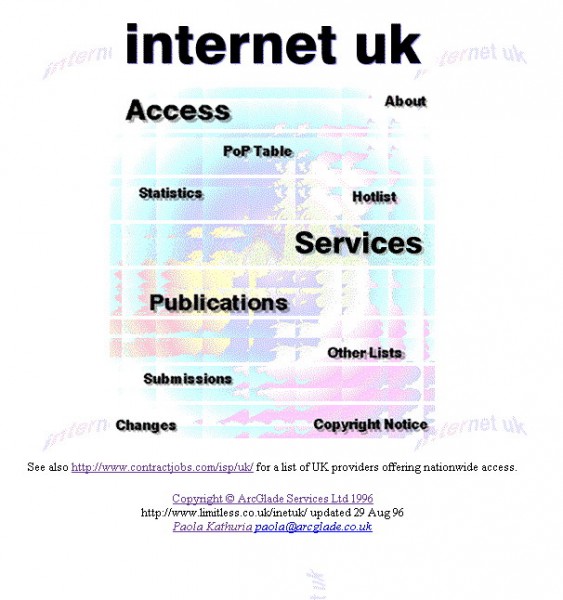