I have a series of crowdfunded projects planned for Kickstarter.

Kickstarter is a crowdfunding platform where people create campaigns for creative projects. Campaigns run for a set time. Projects are funded by a large number of people pledging small amounts of money to help create a tangible product.

Pledges are effectively promises to give money; backers only pay if the total pledges reaches the funding goal by the end of the campaign. If the funding goal isn't reached, no money is taken from the backers. A campaign can exceed its funding goal.

To get used to the logistics of planning and running a crowdfunding campaign, I decided to self-publish my short stories as my first campaign.

See my campaign on Kickstarter.

I wrote some short stories several years ago - they happen to be erotica. My first crowdfunding campaign is to raise funds to self-publish my erotica as a book, fingers & tongues.

When I was reading erotica in print or online, I found it unsatisfying. It either made me cringe - from cheesy dialogue or embarrassing characterisations of women - or frustrating - poor writing or a lot of dialogue. Over a period of two years, I wrote the kind of erotica that I wanted to read. I posted it to an online forum that had 250,000 subscribers. I got high ratings and great reviews.

I first thought of turning my short stories into a book in 2004, when I created a draft manuscript. The book needs proper editing by someone other than me, otherwise it's good to go.

Just to be clear, yes, I needed a small project for my first Kickstarter but I still think my stories are awesome. I've always wanted to see them as a printed book. I know how important it is to portray women in a powerful way in material that appeals to men as well as women.

I decided to use my first crowdfunding campaign to raise the funds to get the book finally into print. I want to publish two kinds of books: just the stories in a handy paperback plus a bigger book that also includes the stories behind the stories.

In the process, I have learnt several skills that I can use in the future, even if this first campaign isn't successful:

During the campaign, I'll gain experience of:

If my campaign is successful, I will have to:

If my campaign doesn't reach its funding goal, I might still publish my short stories on Amazon as an eBook on Kindle. This will mean that I will learn these additional skills:

To learn about crowdfunded campaigns, I read a lot of articles.

I started off with Linda Liukas's post about how she prepared for her own campaign - her book Hello Ruby to teach children programming achieved 3,807% of the original goal of $10,000. She's one of these people who share knowledge. Her post with links to articles she found useful was fantastic.

I read every article she recommended. I also bought the eBook IT WILL BE EXHILARATING by Studio Neat, which is now available to read online for free.

I listened to a few podcasts by Richard Bliss from his Funding the Dream series. I had found him via a Kickstarter LinkedIn group. His information is really good.

Finally, after spending two weeks on my campaign page and not being happy with it, I googled for Kickstarter templates.

I found Kickstarter Project Description Template. I saw "B PPP S BBBBBBBBBB S PP B S BBBBBBBB S B" and initially thought it was written by a mad man. But I read on and I understood what it meant. I changed my campaign page accordingly and suddenly it felt right.

The main things I learnt were:

Creating and sending out rewards came up quite a lot in the articles I read. People often didn't allow for postage and packaging time and cost in their goal.

I contacted printers I'd used before and, after many iterations, got estimates to print (set-up, print and deliver) the three kinds of book at various quantities.

For each book (three sizes and weights) I have worked out the max costs for packaging and postage to the UK, Europe and rest of world. I have backed campaigns where the shipping cost is nearly as much as the pledge level. For example, the shipping cost to the UK for the Hello Ruby book was prohibitive. When planning the rewards for my campaign, I was mindful of this; I decided to simplify shipping outside the UK. I'll instead take a small hit on the profit margin for books shipped to the US.

Finally, I've looked into hiring a Franking machine for a month as a business user to save on delivery costs depending on the number of backers who want a printed book.

One article I read suggested simulating different scenarios of pledge distribution. Since I love working with spreadsheets and visualising data, this was right up my street!

I created a spreadsheet showing actual set-up, print and delivery costs for the books. I calculated the unit price including delivery from the printers. I worked out what my reward levels would be after several iterations.

I then created another sheet to show how much money would be raised with different distributions of a number of backers at the various reward levels. The scenarios vary from most people wanting the cheapest reward (the eBook) to more people wanting physical books.

The bar chart below shows the minimum number of backers I need for 22 scenarios that just reach the funding goal of £1,900. 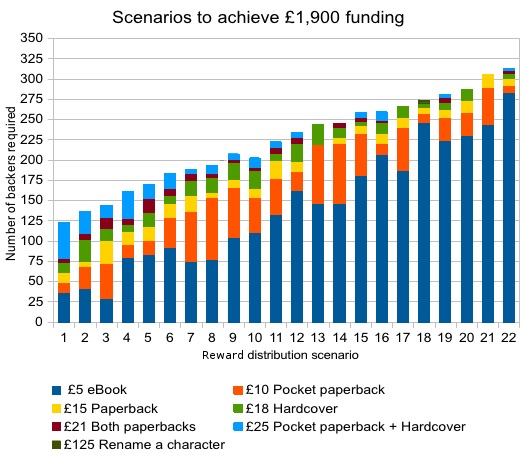 I decided to use Prefundia to work on my campaign page before launch. I know from writing in the past that, unless I think that someone is reading something, it's hard to put myself in the right mode for writing.

I created a bitly link to my Prefundia page. Bitly is a short-link service. It also provides stats to links (geography and referrers).

I spent a lot of time looking at Kickstarter projects of erotica books. Most didn't succeed. The campaign videos showed the author in an unflattering way. I realised that I didn't want to put my face on the campaign - I didn't want to influence what people imagined the characters in the stories looked like.

A campaign that succeeded was Coming & Crying: real stories about sex from the other side of the bed. The video featured people reading extracts from the book. I really liked it. I could see why it succeeded.

I asked around about getting help to make a video like that for free. I then started looking for royalty-free stock footage. As soon as I saw Beachfront's video of projector film, I knew what direction I could take.

I have a Mac now. I opened iMovie and started trying things out. By the end of the day, I'd created my first ever video!

The version on the campaign page is just my second version (different stock footage for the second story and a shortened story).

I spent two weeks on the page, never really happy with it and realising that I didn't actually know what story I was telling about my book. I thought it was a story about me as a Usenet poster 20 years ago. But actually, the reality is that I wrote the stories because I couldn't find erotica that didn't make me cringe or didn't frustrate me from the diversions into dialogue.

I was originally going to use the Kickstarter crowdfunding platform for my erotica project. I read the submission guidelines which doesn't allow any pornographic material. I wasn't sure whether that included the project outcomes too.

Kickstarter approved my campaign. I breathed a huge sigh of relief.

I discovered fiverr.com - an online market place for products and services starting from $5. I bought an "honest book review" from Cheezees. It reassured me that my stories were as good as I thought they were. I was also able to use some of her comments in my campaign page.

I bought alternative headlines from ralphie2. I use some of them on my campaign page:

I haven't designed the book yet but I wanted something striking for my project thumbnail. I saw from other people's campaigns that they can look amateurish.

I went through my archive of digital art I created a few years ago. I picked a floral image that looks great on screen.

I used it as my campaign image and also at the start of my video.

Kickstarter offers very few formatting options for the campaign page other than headings, lists, bold and italics. People are resorting to graphics for formatted text. It's the 1990s all over again!

My first graphics describing the different rewards and pledge levels were okay but amateurish: 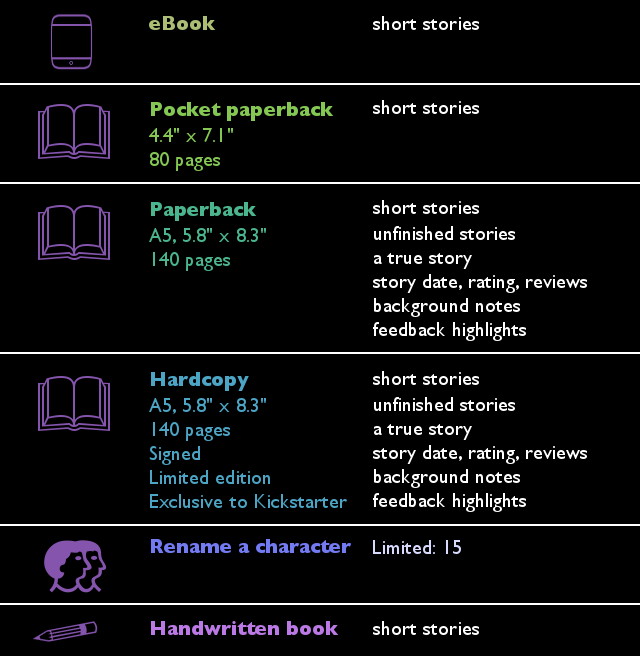 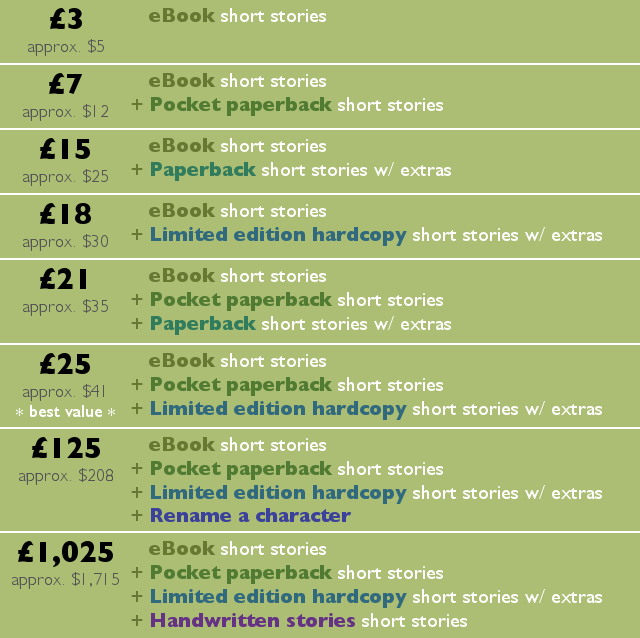 I searched for other campaign graphics for better examples: 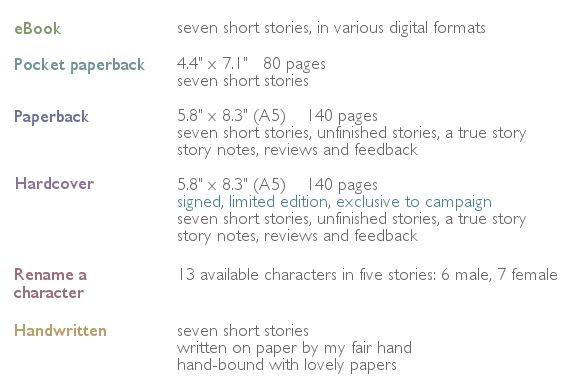 My second version was a big improvement: 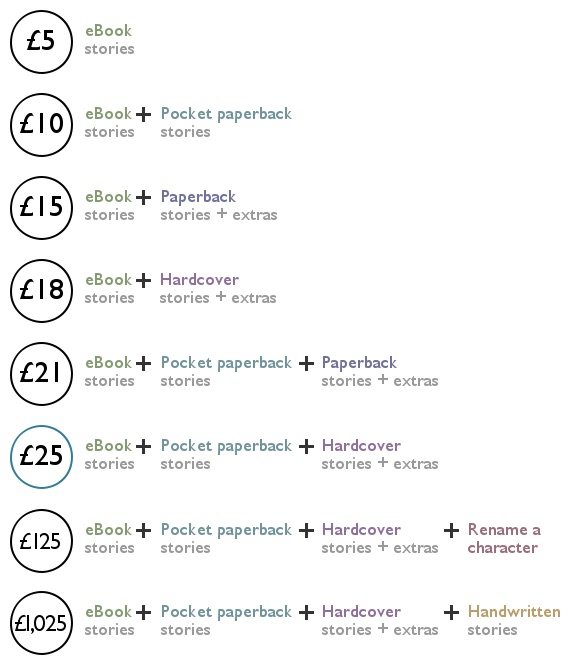 I didn't want my video to be the first thing that people saw and so I had to come up with a striking image to display at the top of my campaign page.

I spent several hours trying out different things with typographic ornaments and script typefaces. I created something that looked like expensive packaging for toiletries.

I then reverted to my original digital image, remembered that off-centred crops create visual interest and went for a blocky typeface to appeal to the guys. I would have liked a pretty script typeface but it looked too girly. My book is for both men and women. 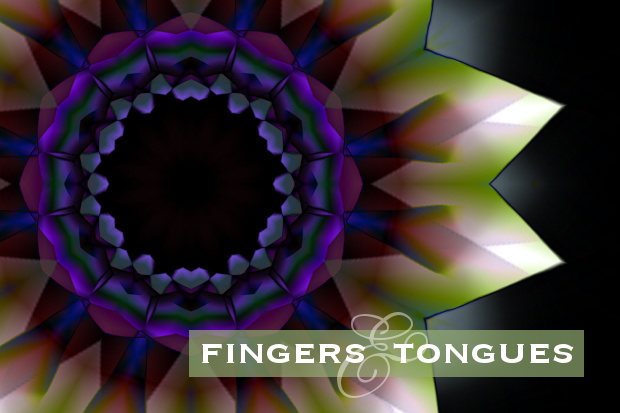 How you can help

Wish me luck and please back my campaign if only at the minimum level of £1. Thank you.

I'll be able to apply what I've learned from this campaign to future campaigns. In no particular order:

Congratulations on this very public step towards the launch! That was a really interesting read with some great information for others who might want to give it a go. You clearly did a huge amount of background work to set it all up. I really hope it all pays off.

Why I love programming