A new kind of erotica

I think I might have invented a new genre of erotica. I ran a successful crowdfunding campaign on Kickstarter to print my book, fingers & tongues.

I thought long and hard about how to make the design work for the book's intent. Using my experience as a UX consultant, I made user-centred decisions on the typography, editing, book design and the use of imagery.

People know erotica as written stories with some sex scenes. Pornography tends to be known as a visual medium; it's filmed from the male perspective and any women are only there to enable his pleasure.

I think we need to go back to the original definitions.

The Oxford English Dictionary, the definitive record of the English language, says:

Who would want my book

My erotica is erotica you use. I call it erotica as a tool. I wrote them for both men and women to enjoy. (Showing women as powerful - rather than objectifying them - in sexual material must be a Good Thing.)

Like any tool, porny erotica must have "users" and can be well or poorly designed, right?

My book will be professionally edited before it is printed. The stories will be printed in a light, pocket-sized book, with large inner margins for easy reading.

I am also making an eBook version but I believe that it's easier to read a small book one-handed (turning pages with a thumb) than holding a tablet and trying to swipe with one hand.

When briefing the editor, my main concern is flow. I don't want anything in the writing or choice of words to break the reader out of their fantasy.

When readers are themselves in full flow, the book has to be there alongside them, helping them along; a misplaced apostrophe or a clumsy phrase will be like a bump in the road, jolting the reader back to cold reality.

That means the punctuation and sentence structure needs to be right, but also the flow of the story itself.

Read the following excerpt. Is there anything that made you pause for a second and go "wait, what?".

“What do you think?” Tom was looking at him intently.

Ben coughed, struggling to remain calm, glad of the folded newspaper on his lap. “It’s a good story. What do you intend doing with it?”

“I’m not sure. Try to publish it, I suppose.” He stood up to get another Bishop's Finger from the cabinet. “So you don’t think it’s a bit crass going for the male fantasy of two women together?”

Was it the name of the beer?

Is there anything in the excerpt below that forces you to retrace your steps?

She noticed Lauren walking up towards the house long before her neighbour noticed Elizabeth sitting on the steps. No lights were on in the house and when Lauren finally turned to walk up the path Elizabeth sat still watching her eyes on the ground before her apparently lost in thought.

Was it the lack of commas in the second sentence?

A paragraph might be well edited but can still be let down by a cheesy choice of words.

For example "he boggled at her ample bosom" or "he approached the one-eyed monster".

Even with widow and orphan control, a paragraph can still be split over two pages.

In the example below, the split paragraph directly follows the introduction and starts to describe intimate contact. 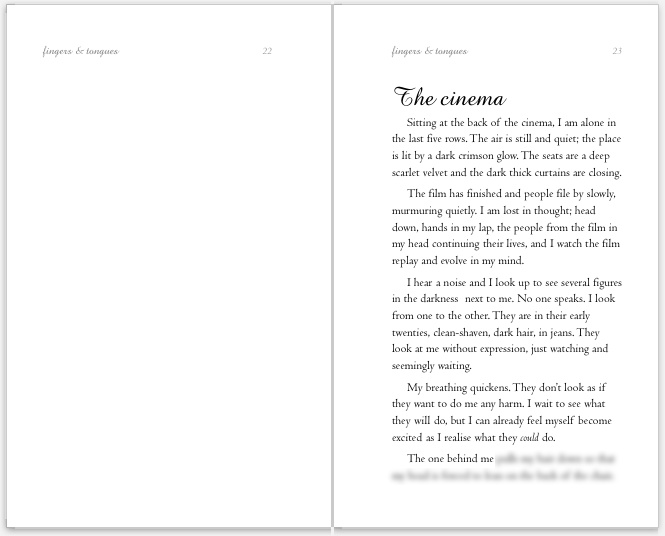 A page break after the introduction would instead add to the tension, given the words in the last sentence "I can already feel myself become excited as I realise what they could do." 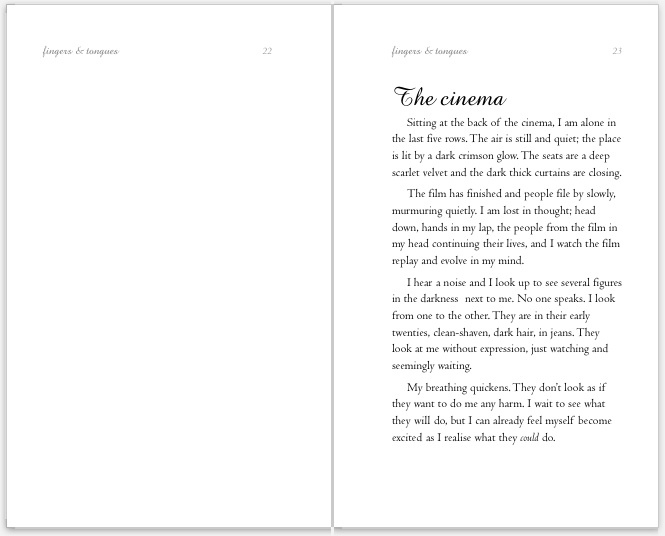 Go with the flow

Convention dictates that new stories in a book of short stories should start on a right-hand page.

However, I'm not a conventional person and my readers aren't going to want to turn a page just as things start getting interesting. 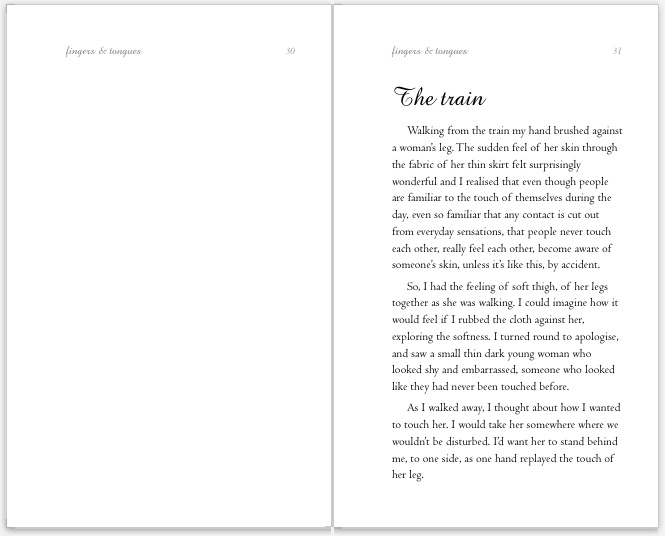 Instead, I will start this story on the left-hand page so that the reader has more time to get into the story before they have to turn the page. 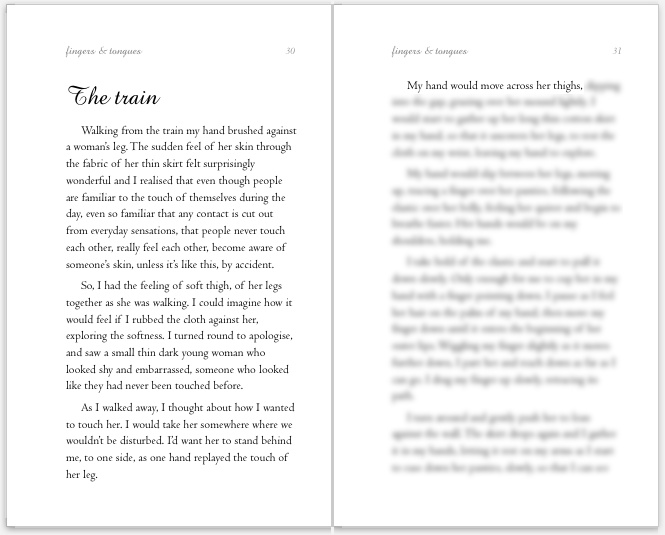 There must be a great temptation by erotica authors to entice readers with pictures and photos. However, I think that the power of a written literary form is that the reader's own imagination is added to what is described on paper.

For example, in my story The Train (excerpted above), I don't state the gender of the person telling the story. I know what I imagined when I wrote The Train, but the omission means that both male and female readers can place themselves in the story. A "helpful" picture would constrain the story.

There's then the issue of what people find attractive or unappealing.

If I put a photo of a sensual couple on the cover, I've already narrowed expectation to the scenarios described and the physical types (e.g., white, slim, brunette). Maybe my readers have other preferences.

By keeping physical descriptions sparse, and by not providing any pictures, my readers can supply their own descriptions to the blank canvases of my characters: flexibility in simplicity.

Was this book written for me?

I'm not a trained graphic designer but I did work hard on a typographic style that would appeal to both men and women.

I refer to the book as fingers & tongues because the lowercase letters conveys the right amount of informality.

There also seems to be a disconnect between what we know to be true (women enjoy sex too) and what is acceptable to say in public (women enjoy sex too). We still have a long way to go to address women's perceived role in society (wife, mother, cook, cleaner, madonna, whore).

See my book's pitch on Kickstarter.

« previous
Why Kickstarter?
next »
#YesAllWomen

Reblogged this on kinginascent and commented:

I really enjoyed this. It speaks to a degree, to my own sensibilities.

Great idea to use Kickstarter as a way to publish your book! From this post, it's obvious that you put a lot of thought and care into crafting your story and book. You mentioned at the beginning that your Kickstarter campaign was successful, and I'm very glad! Congrats!

Thanks, August. I blogged more about my first Kickstarter experience: http://www.paolability.com/blog/tag/kickstarter/

An extremely well designed concept. You are going to do well. Congrats!