I ran my first Kickstarter campaign 30 Apr-21 May in 2014 to raise funds to print a book of my erotica.

This was the first time I've marketed anything. I decided to document my experience. My campaign was successfully funded.

I planned my campaign page on Prefundia. Knowing that my campaign was under the public gaze focussed me. My campaign text went through MANY iterations before it felt right.

If someone likes a project they see on Prefundia, they can sign up to be notified when the campaign is launched. 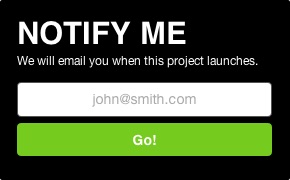 I posted the Prefundia page to Facebook to get feedback and to introduce my project to my contacts.

Ask people for a £1 pledge

In the week before the launch of my campaign, I contacted most of my friends, family and acquaintances for support.

I contacted everyone with a personal message using the medium I usually used to communicate with them.

I asked for a £1 pledge only, explaining that a campaign that had backers would look popular and attract more attention.

I included a link to my Prefundia page. I created a step-by-step guide to making a pledge for those who had never used Kickstarter before.

I also posted campaign-related photos on Instagram during my campaign (I have a lot of toy photography followers).

I personalised tweets to people I knew in the salutation so that they would know they were getting a personal message.

I tweeted 309 people who followed me but that with whom I had had no prior contact. @SexInWords was one of these followers. He tweeted about my campaign for the three weeks it ran.

I gave them a link to my campaign page, again asking for a £1 pledge. For my Twitter contacts, I made a page on my blog with my my request for support and a link to the how-to guide.

I acknowledged every reply in the medium I'd contacted people. I also profusely thanked anyone who expressed an interest in my project or who said they would back my campaign.

A week into the campaign, I contacted those people who said they would pledge but who hadn't yet.

I found this very hard - contacting people out of the blue. My message must not have been compelling because my activities only resulted in two retweets and no backers.

Two of the people following me on Twitter had blogs - one to review erotica and other to review sex toys and books. I asked both for a review. They both did it at short notice while the campaign was running.

The reviews provided me with material I could post in an update and, later, in my back cover text.

During the campaign, I was contacted by two people - one via Twitter and one via a Kickstarter blog post - offering to edit my book.

I eventually had four potential editors. I chose two editors based on their work on my shortest short story after the campaign was funded.

Fiverr.com - I paid for tweets by sex-related accounts with thousands of followers. I wrote the tweet to include a bitly link to my Prefundia page. Bitly gives some useful stats. I got some retweets and link views but no backers this way.

I also used Fiverr to get a review of my stories and to write headlines. The headlines were especially good value for money and resulted in "Smart erotica with women and men as sexual collaborators." I used the reviews and headlines in my campaign page.

Backercamp - (originally gofounder.com) I paid $9.99+ for tweets during my campaign. I sent them a graphic to use and headlines. They sent out some well-composed tweets.

Kicktraq - for the last 4 days of my campaign, I paid for a banner ad on Kicktraq.

They also linked to the book review on Christina Harding's review blog. I don't think I got any backers with either of these.

CoPromote - with the several hundred followers I'd cultivated on Twitter, I used that account to get tweets send by other people using CoPromote. I found out about this service via WordPress.

The stats for one of my CoPromote campaigns is below. 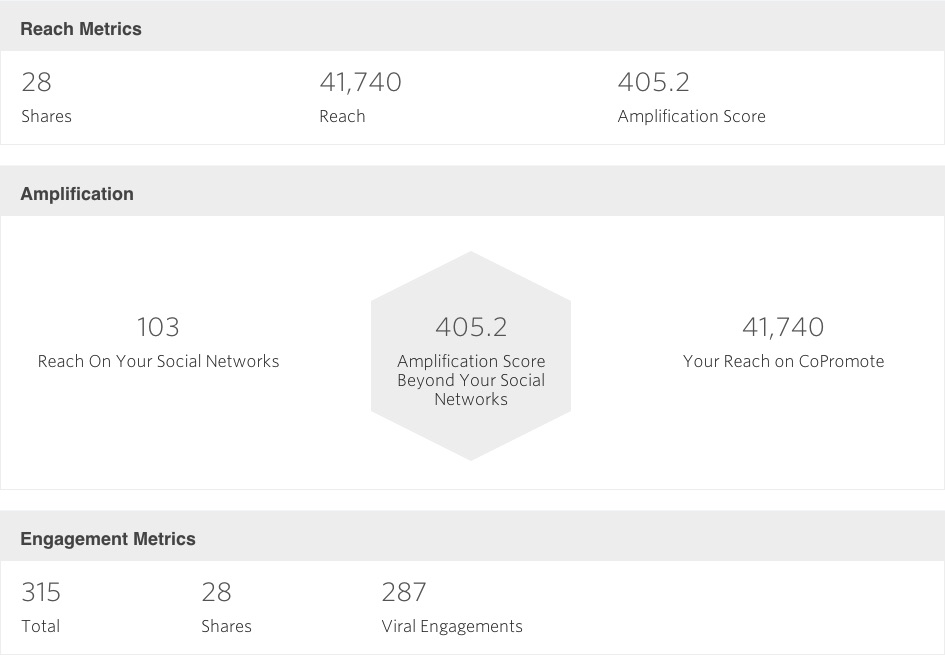 The CoPromote campaign was seen by a lot of Twitter accounts but it's likely that many of these weren't real people. I checked the followers of some of the people who shared my tweets and saw that they were automated accounts.

Contacting people I know was the most effective. This is part of the advice I read in crowdfunding campaigns. I found it hard to ask people for help. However, it was made easier by only asking for £1.

Number of pledges by discovery method

The percentage of pledges by how people heard about the campaign. 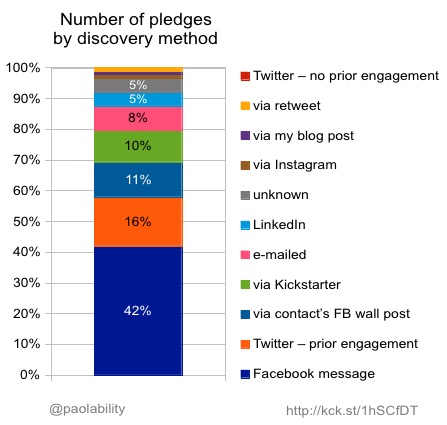 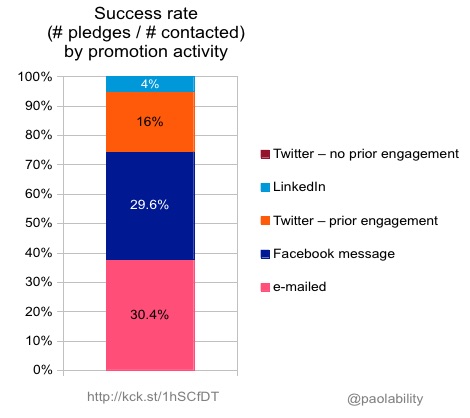 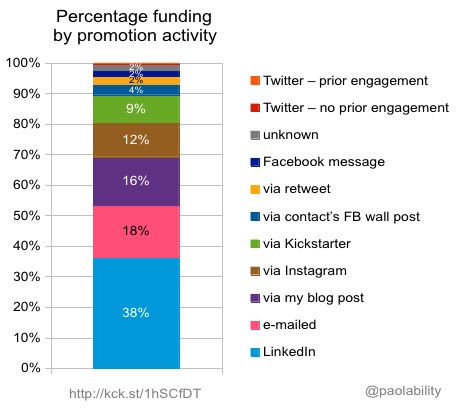 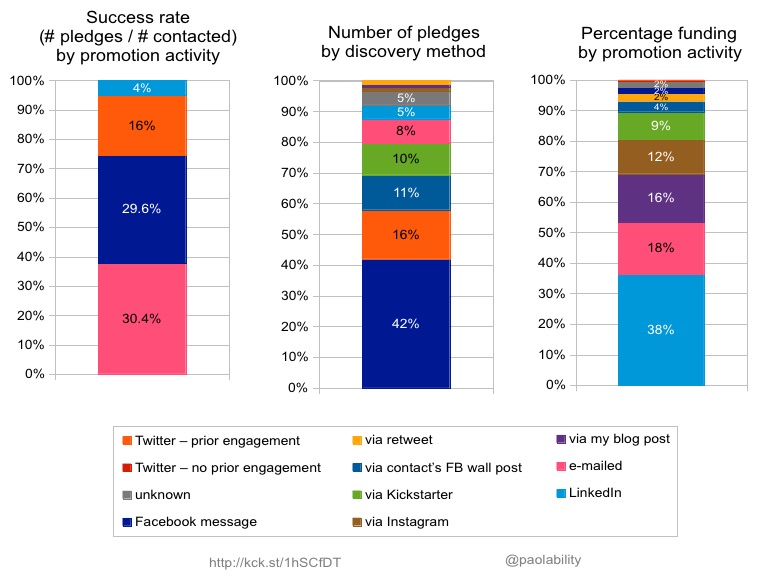 Some people backed my campaign after finding out about in on Kickstarter:

After a campaign has ended the campaign page can't be edited. I prepared the changes in advance by copying over the text to a word processor, recording changes.

An hour before the campaign ended, I changed the Kickstarter page to its permanent post-campaign version. I referred to the document I had prepared, using the Show Changes feature so that I could make the same edits to the campaign page itself.

I created a replacement graphic to use when the campaign had reached its funding goal. This appears at the top of my campaign page. This main campaign image is also used as the campaign thumbnail in Kickstarter search results. 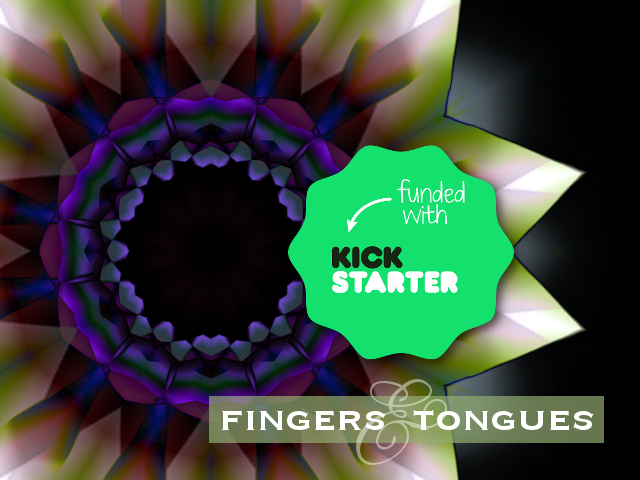 I added a new linked "click here" graphic at the top of the campaign page. I'd seen what Commodity Goods had done on their ended campaign page. I saved their image to a scrapbook and made a similar image near the end my campaign.

This image clicks through to a page on my web site which is a Launchrock form. It will later be an order form for the book. 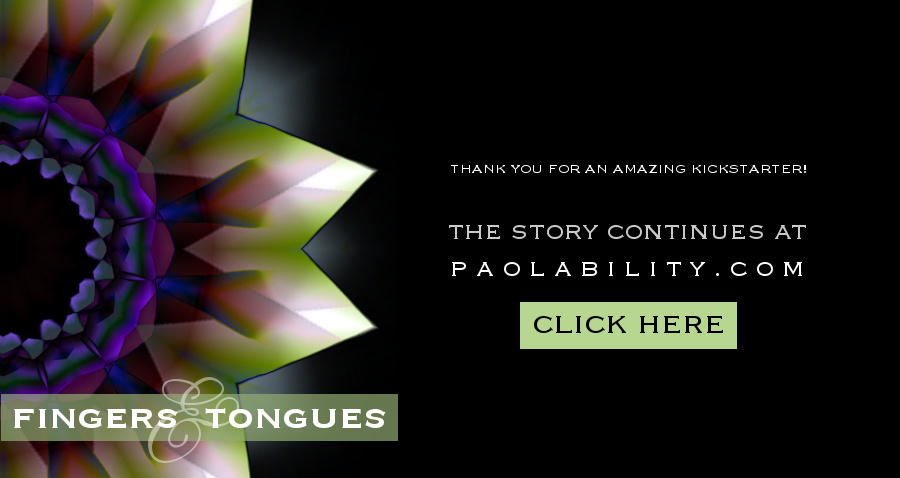 Launchrock is a service for people who are about to launch their site or product. It creates a widget to embed on a customised sign-up form your own web site. 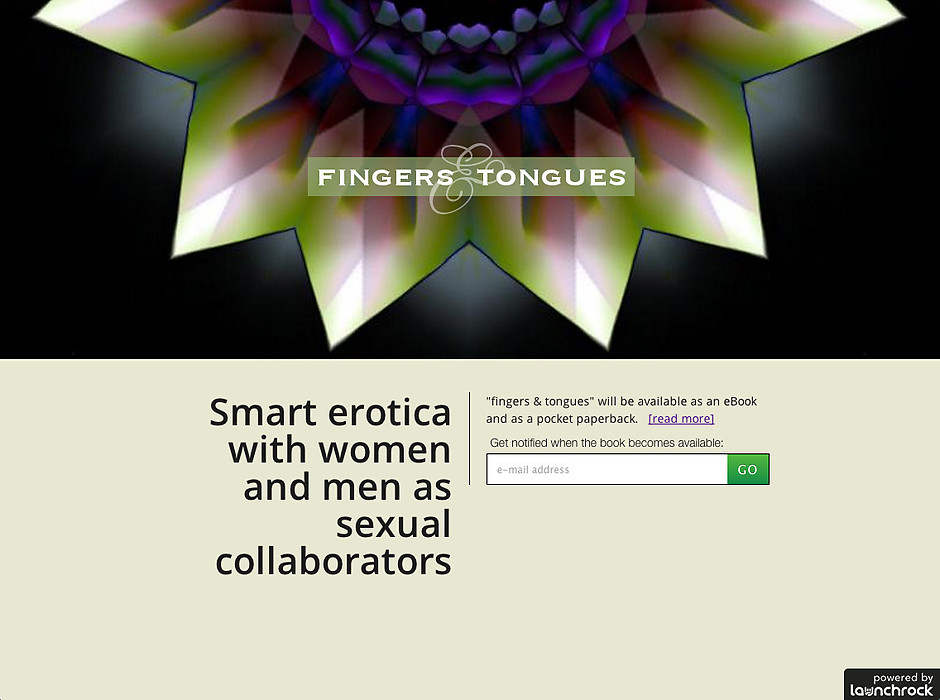 I've had a few sign-ups through Launchrock. It's definitely worth doing again.

What I will do different next time

I won't contact followers I don't know on LinkedIn and Twitter. It is very time-consuming with zero success.

I will use Thunderclap (to promote my tweets).

I will get reviews before the campaign launches.

I will figure out how to approach relevant bloggers.

« previous
Value truth and accuracy
next »
Why is your hair blue?

"Girls Can Code" on "Points of View"