If you read erotica, do you find yourself flipping forward to the sex bits? If so, my new book "fingers & tongues" is for you.

Dissatisfied with what I found online and in books, I ended up writing my own sexual fantasies as short stories. I posted them to an online erotica forum with 250,000 subscribers. I received high ratings and rave reviews from both men and women.

I think my stories are unique because I'm pretty unique. I want to immortalise my stories in a beautiful book. I will use crowdfunding to do so.

This is my story.

UPDATE: My Kickstarter campaign was successful!

UPDATE #2: Read about this project 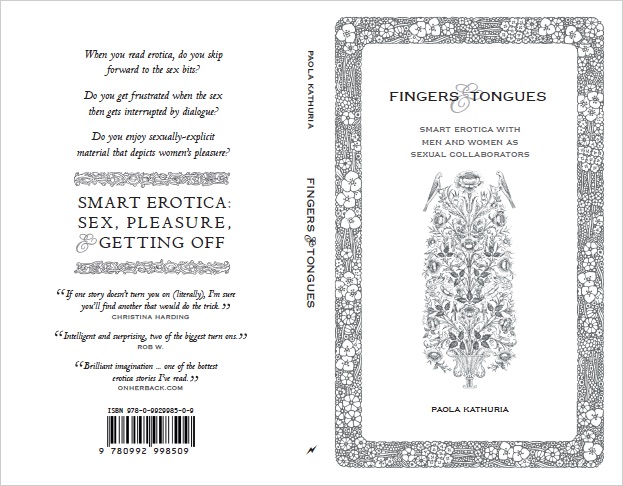 I'm a smart, feminist professional woman. I can't believe that I'm the only one who, not only masturbates, but who needs some help getting there when they're by themselves.

The set-up can be laughable, the dialogue simple-minded, the women submissive but, more importantly, the women are used as a mere collection of orifices. They don't look as if they're having any fun. Yuck. I don't want to see that at all.

So I use written material. And I know that millions of others do too because there are thousands and thousands of men and women writing erotica to post online or to publish as e-books; even "Fifty Shades of Grey" started off life as Twilight fan-fiction in an online forum.

Because I am an intelligent, professional feminist, not ANY written material will do. Good writing is essential to me.

Bad writing in erotica is worse than no erotica at all. Bad writing kills the mood; it could be a cheesy choice of words, a change in pace with dialogue or something as small as a missing comma. Or the story itself can be a distraction because of an demeaning female role.

As a woman and a feminist, it annoys me that the idea that women not only enjoy sex, but can initiate sex or be powerful in sex is still seen as embarrassing. Surely it's a win-win if everyone involved receives pleasure in equal measure.

Erotica as a tool

Because I use erotica as a tool, I don't read erotica for character development, pages of dialogue or a solid story. I respect that kind of erotica - it's a true literary form - but it's just not for me.

I couldn't find enough of the kind of erotica that I wanted to read. So I wrote my own; I figured that there were other people who also wanted their erotica well-written, stories that are extremely explicit and could stand up to multiple readings but which ultimately served as a tool.

As a tool, erotica needs to be intelligent, surprising and believable. I need to see the woman's pleasure. I know that there's a thrill in giving pleasure, in teasing and holding off, of the pure delight in seeing your partner in ecstasy knowing that you were the one that made it happen. That's what happens in my stories: once the sex starts, it continues at a consistent pace, with no pauses for dialogue - the pages are stuffed with very explicit descriptions.

My stories describe sexual encounters between men and women in different combinations but they all have in common a) the woman's pleasure and b) the delight in GIVING pleasure.

If you need a book like that, a book that you can return to and enjoy over and over, if you want a book that is small and light enough to fit in your hand, and one so beautiful to look at that you want to pick it up, then "fingers & tongues" is for you.

Because there's a story behind the stories - of why and when I wrote them - I'll be producing two books:

I wrote sex stories 20 years ago over a two-year period for the Usenet group rec.arts.erotica.

Usenet was where people hung out before the web browser was invented. By 1994, there were already 30 million people actively reading thousands of groups on Usenet. We were from universities and computing companies. Besides Usenet, we corresponded in e-mail, chatted online in IRC and played multi-user games in MUDs.

rec.arts.erotica was a moderated group with 250,000 subscribers, mostly guys in those days. I posted my short stories there for two years and received the most amazing feedback from both men and women.

I was really surprised at what I ended up writing about. It turns out that I'm bi-curious. I realised that there were things that excited me only as fantasy; I had no interest in acting them out. But that's okay; isn't the freedom of fantasy the point of exploring one's own sexuality?

I tried to improve my writing skills with each story and so I set myself some writing challenges.

In the video below, I read the beginnings of two stories.

Get the e-book version of the first story - Reaching for the Moon - from Kobo or Barnes & Noble [Nook format].

The second book will additionally include some unfinished and incomplete stories: five beginnings and a sex scene.

I have two unfinished story beginnings and one matching sex scene because I had wanted to make a point about how female characters were often insultingly portrayed in sex stories written by men (and even by some women).

I wanted to show how ridiculous a young man would look if he was described the same way a young inexperienced woman would be in a story with an older experienced man who decides to take her in hand.

I wrote the sex scene of an older man with an inexperienced young woman. However, I found it impossible to write sex that could be easily switched male/female and so I abandoned the stories. However, I later adapted one of the beginnings for "The Dream" to introduce its main female character.

The second book will also include a true story (Innocence) that's never been made public before.

I've collated the original story information, such as the posting date, rating and review.

Finally, I'll be including highlights from the feedback people mailed me at the time. The feedback was extraordinary and was the main reason I continued to write erotica.

There will be two versions of this bigger book: a paperback and a signed, limited edition hardcover exclusive to the crowdfunding campaign. 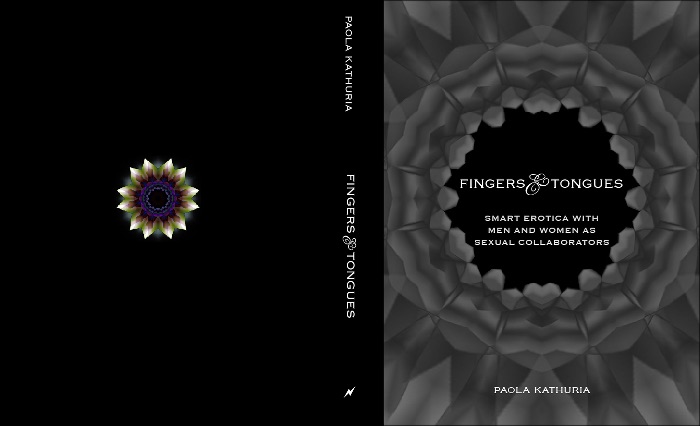 I need to raise funds to get "fingers & tongues" properly edited by someone else; I want to make sure that the flow is perfect and that there are really no distractions.

I also want to make some changes as a result of the reviews I got 20 years ago. The remaining costs are for set-up and book printing.

If I exceed my goal, I will hire a professional designer. If not, I will design the book myself.​

I've done it before. I designed a book in 2002 that continues to sell.

I've obtained quotes from the printer I used for my first self-published book. CPI is the largest book printer in the UK.

I have quotes for different quantities at different qualities, depending on how much money this campaign raises. Money raised over the initial target will go into a heavier paper stock and special effects for the hardcover such as an embossed cover and coloured paper edges.

This is the first of several crowdfunding campaigns I have planned. I wanted to start with "fingers & tongues" because the material is 80% there and I'm really proud of my stories. I haven't found anything else like them online. They still turn me on. That's how I know that they're good.

If you do back my crowdfunding project, you'll only be charged if my minimum funding goal is reached. The minimum covers editing, the minimum of design and the printing of 150 books.

I worked on my campaign page for two weeks but wasn't happy with it. That's why I wrote this essay.

See my campaign on Kickstarter.

« previous
How will you change my life?
next »
What I have learned so far

"Girls Can Code" on "Points of View"

The daft things that people have said to me

The next American President

Confessions of a chat addict