I know this post is out of date order but I want to complete the story of the events leading up to my surgery.

At the breast diagnostic clinic, I was ushered down a corridor into a room on the right. The corridor ended in a tiny room in which a dark-blue-uniformed woman sat, facing scans mounted on a back-lit wall.

She smiled feebly to me; it must be grim having to analyse a series of tumour scans and imagining the impact on the faceless women whose scans they were. 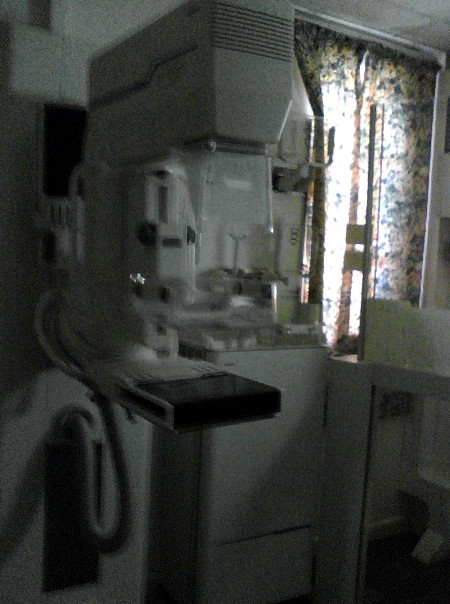 I entered a small room where the curtains were drawn. The nurse left the room as I removed my top clothes. I stood next to the scanner as the nurse positioned me. She placed my breast on a plastic shelf and brought down a higher movable shelf which was marked with three semi-circles in decreasing sizes - marking my position in the plastic sandwich.

As I calmly stood there, the nurse bustled around me, lifting my arm just so, or rotating me a fraction. I couldn't discern any change but it was obviously making some difference; it was like being posed for an elaborate sculpture that only she knew the shape of. I commented that this was probably the only time I was happy not to have small perky breasts because I could imagine that having them sandwiched would be unpleasant.

I was scanned two times facing front and two on the side. After getting dressed, I went back into the waiting room.

I sat by the window and outside was a small pink-themed garden with no flowers yet. I turned to look at the women. Some were sat with their A4 sheets of paper and so this must have been their first clinic visit too. Some had come out of examination rooms clutching closed hospital gowns to their chests and I wondered when in the afternoon that would be me.

The women were all different ages, some younger than me and some older. Most were by themselves. Only a few had someone with them. As I was looking out the window at the other end of the small building, I saw a man stride past wearing sun-glasses. It looked like Frank - no one else would be sensible enough to have sun-glasses with them in early February. I waited in anticipation for him to walk into the waiting room.

A minute went by and I wondered if I was mistaken, that it wasn't Frank. I thought about texting him. I decided it wasn't him.

It was over an hour after my mammogram before I was called again.

After entering a different but larger, darkened room, it was the same procedure as before: I was left alone to take my top clothes off and then lie on the examination table on my side.

A male doctor introduced himself and performed the ultrasound. The screen was positioned such that I could see it too. My lump looked huge on the screen. He measured its height and length - I was later told it was 27mm. He also scanned around it and under my arm.

There were moments of red flashes and I asked him what they were - he said that it was blood flow as the ultrasound showed movement too.

I came out of the examination room to see Frank sitting in the waiting area. I'd forgotten that there were two entrances to the clinic and two waiting areas. I was glad to see him but sad that we'd both been sitting alone for over an hour, not knowing that the other one was there.

While he was getting a hot drink from the machine in the other waiting area, I was moved to a third small waiting room down a corridor. I texted him to let him know.

A man was reading the paper opposite me. I wondered if he was a patient. A beautiful brown-skinned woman with long straight hair came out and it was obvious that he was her husband. She joked with the nurses about not playing tennis any time soon. After the nurse left, the woman turned to me and said that I needn't worry about the biopsy, that it was fine, that she had been terrified of it. I smiled. I hadn't been feeling terrified.

I was back in the same room with the ultrasound and given a local anaesthetic (not sure how, I didn't feel anything and I didn't look). The biopsy device looked a bit scary in its hugeness. I saw doctor's hand move out of the corner of my eye and realised that he must have been making a small incision. Again, I didn't feel a thing.

One nurse was behind me and one stood in the centre of the room, in my line of sight. She was the nurse who'd given me the mammogram earlier. The ultrasound screen was still on. They explained what would happen, saying that there would be a large noise by my ear when the biopsy was taken.

As the doctor positioned the biopsy thingy, the nurse in the room said, "you have interesting names, where are they from?" I realised that her purpose there was to distract me and so I, loving to chat, regaled them with stories of my family. There was large noise like an industrial stapler and a sharp sensation which dissipated quickly.

I was told I'd have two biopsies but they did three. I found myself bracing myself at the third one. Not knowing what was about to happen was better. I saw a black line whoosh through my lump on the ultrasound screen.

I can't remember what prompted my comment about family names but said that my family was like the Goodness Gracious Me family, all wanting to be English despite being immigrants. The doctor, who'd been busy operating the biopsy device and looking at the screen, had obviously been listening to us natter because he chimed in with "I loved that - what was it - oh, Let's Go For An English sketch." I felt I deserved a point for getting both the nurses and doctor engaged in chat. :-)

As he finished up, I asked about the biopsy device. He respected me by opening it up to show the spring and explaining how it worked. I didn't want to offend him by saying that I wasn't interested in the hardware, more of what it does.

Back with Frank in the waiting room, it was then about 15 mins before I was called to the clinic, where I would talk to the consultant about what they had found so far. I didn't realise until during the consultation that I was actually talking to the surgeon who would operate on me.

I asked whether Frank could come with me. After we entered the room, I comically (not) struggled taking off my cardigan and jacket before hanging them up. I almost wanted to throw them on the floor as they were all waiting for me - the consultant ("Miss P"), the Breast Care Nurse and Frank.

Miss P shuffled through some papers and I saw that she was looking at the form I'd filled in when I arrived.

For a split second I thought about petulantly correcting her with "47 and a half" but decided that perhaps this wasn't the time to be a wise guy.

The surgeon was very elegant; she wore beautiful clothes and what seemed to be three necklaces which were different in style but which looked very good together. The Breast Care Nurse was also wearing a lovely necklace. I couldn't resist commenting on their lovely jewellery. There was a murmured acknowledgement.

She got straight to the point and said that the lump looked "suspicious" and that I should prepare myself that it was cancer. I was very surprised, not at all expecting this news and exclaimed "oh!". My full attention was on the surgeon; I didn't even turn to make eye contact with Frank.

Although I was really annoyed then and there - and said so - with the GP who'd said it was likely just a cyst, I realised later that the GP had done me a favour as I hadn't worried about it at all during the previous two weeks.

Miss P said that I would get the biopsy results in a week but that the doctor who'd done the ultrasound said that the lump had all the characteristics of a cancerous tumour. The surgeon said that, even if the lump turned out to be benign, she would still want to remove it because of how it looked, following another biopsy.

I finally looked at Frank and was worried about him, thinking about how life could drastically change for both of us. I was told to find out whether anyone else in my family had breast cancer.

When asked if I had any questions, I couldn't think of any. I turned to Frank. He asked "what happens next?" I wasn't surprised when Miss P said that we'd get that information when we come in for the results, that usually people "go to pieces" at this point and so they didn't give out a lot of information that might not turn out to be relevant.

As we got up to leave, the Breast Care Nurse walked us out and thrust her card into my hand, saying to call her if I had any questions.

I knew that my cousin on my dad's side was diagnosed with cancer two years before but not what kind. I hadn't seen her since my father's funeral in 1998 and now I had to write to her out of the blue. I also resolved to ask my brother to strike up a conversation with my mother to find out whether there was any breast cancer in her family. I knew that if I asked her myself, I'd end up having to say why I was asking and I didn't want her to worry unnecessarily.

We left the clinic and ended up going to the next town to buy the things that Frank hadn't been able to find in Windsor. I had a hankering for a JD Wetherspoon pub meal and eventually found one on the edge of town.

There, I wrote in my diary:

Thinking that I shouldn't blurt out everything I can think of saying as I actually want to put it out of my mind.

I wondered, if the results were bad, whether it'd be hard NOT to tell friends (as I'd decided) because it would be an effort to behave normally when I was, instead, distracted.

Gonna do what I think is best at the time, as I did at dad's death.

I knew that, whatever I might think then about how I will be or what I want, that I might later change my mind, and that was okay, that it was allowed.

« previous
Back home and feeling dandy
next »
Chapter 4: Getting the biopsy result