This morning Frank and I went to see the oncologist - a doctor who specialises in cancer - to find out about my treatment.

My appointment was for 10:50am but the Breast Care Nurse that we'd seen at the post-surgery results last week said that Tuesdays were very busy and that, even if we arrived late, we'd be waiting for them, not them for us.

I called the clinic just after 10am, explained what I'd heard and asked what new time I should come in. They suggested 11:30am.

We entered the quite-full waiting room at 11:25am and I was called in to see Dr A. at 12:05pm. I used some of the waiting time to fill in the clinic's feedback form with praise.

Seated in Dr A.'s office, he wanted to go over things from the beginning by asking some questions I'd been asked before.

He asked how and when I found the lump and how I was feeling after the surgery. He asked whether there was any history of breast cancer in my family.

He then asked me what I knew of what was going on, what it all meant. I said that I understood that the tumour had been entirely removed as my margins were clear, that the three sentinel lymph nodes were clear, and that this meant that the cancer was gone. I knew that my tumour was responsive to oestrogen and progesterone and would undergo hormone treatment, and that chemotherapy and radiotherapy were to "mop up" any lingering cancer cells.

He said that this was right and explained that radiotherapy is for clearing anything left over after surgery; a lumpectomy + radiotherapy was now considered as effective as a mastectomy with regards to preventing recurrence of the cancer within that breast.

Chemotherapy and hormone therapy were given to reduce the chance of secondaries - my breast cancer turning up elsewhere in my body.

The HER2 results were still not back; cancers which are HER2 positive (that is, those stimulated by the protein, epidermal growth factor) tend to be more aggressive. It means that I now have a new result of importance to await. If my tumour turns out to be HER2 positive, I'd be additionally treated with Herceptin for a year.

The doctor asked to examine me and I giggled as a curtain was pulled just in front of where Frank was sitting. Besides checking both underarms and breasts, Dr A. also felt the sides and back of my neck, asked me to breathe in deeply twice and tapped on my back, checking my lungs.

I don't know what the 10% means in terms of how it'd compare to my survival rate if I hadn't had cancer. As Dr A. said, I can still die of other causes.

I am to have six sessions, three weeks apart, of FEC chemotherapy, starting in a couple of weeks at the Windsor clinic.

(Referring to the new information booklet I was given by Breast Cancer Care) FEC is a mixture of three chemotherapy drugs: 5 fluorouracil (aka 5FU), epirubicin and cyclophosphamide. The dosage I will get will be determined by my weight and height (body mass, I assume). The drugs will be administered by drip over two hours at the clinic.

Radiotherapy and hormone therapy would start after the chemotherapy.

How I react to the first chemotherapy session will be a good indication of how I will manage over the whole course, because different people experience different levels of the side-effects. Frank will be with me the first time but it's possible that I will be able to go to subsequent sessions alone.

Each (subsequent?) session is preceded with a blood test to check that my white blood cell count is high enough for a treatment. The information leaflet says that "chemotherapy can affect the bone marrow, reducing its ability to make new blood cells. Your number of white blood cells can become low, making you prone to getting infections; being less able to fight infections means you could become very ill."

Dr A. said that at the first sign of an infection, I should go to the hospital - day or night - to get a blood test and to be put on antibiotics, if necessary. He said that 5% of people on chemotherapy get severe infections and that 1% get infections that are life-threatening. He listed the signs to look out for and said not to try to brave it out, that an infection wouldn't get better, but to treat any signs of infection seriously.

That said, I mustn't live in a cocoon; I can still go out and do things where people are but I should avoid people who were ill or "sniffling, blowing their nose" - just be mindful of my state.

Walking for exercise was good as it'd make it my body stronger to deal with onslaught of bacteria that are around us all the time anyway. I've got the next few weeks to do regular brisk walks and see if I can lose some of the weight that I've put on since January.

My immune system will be compromised until six weeks after the end of my chemotherapy.

Feelings of sickness and vomiting are quite common side-effects of chemotherapy and the main side-effect that I am (currently) concerned about.

I will be given anti-sickness medication before, during and after treatment (Dr A. asked whether I suffered from travel sickness - I do) but the levels can be adjusted or changed to something else depending on how I feel after the first session.

I planned to ask about dieting since I've put on weight since losing 70 lbs in 2008 and wanted to lose about 30 lbs this year.

Dr A. said not to under-eat during chemotherapy because it'd make my body weaker with regard to infections.

It's not uncommon for people to comfort eat during chemotherapy and the steroids I'd be given increases appetite. I must drink and eat regularly and not use chemotherapy as a way of losing weight.

Fatigue (extreme tiredness) is an issue and might increase with the sessions.

One of the earlier booklets I was given suggests keeping a fatigue diary to find patterns of worse and better days so that one can make plans. I don't want to be a recluse over the 18 weeks of therapy by not going out.

One of the FEC drugs causes total hair loss (although not necessarily of my eyebrows, which are dark and huge), usually from 2-3 weeks after starting treatment.

I could wear a cold cap during sessions but this adds an hour either side.

It is a very cold tight cap that reduces the blood flow to hair follicles to reduce the amount of drugs reaching them. But it isn't a guaranteed method of preventing hair loss. And, considering how cold it'd have to be to work, as well as adding two hours to sessions, it sounds like an extra unpleasantness, whereas hair loss itself is just a temporary inconvenience.

I am not bothered about losing my hair for a few months - I am more concerned with feeling nauseous all the time as I expect that would make life very miserable.

I have been thinking about what I'd do if I lost my hair since February, when I spent a while looking at styles and various options on Etsy and Ruby Lane. (I also considered getting a tattoo on my skull. However, I've since found out that I mustn't get a tattoo on my skull - or anywhere else - while my immune system is compromised.)

I have sticky-up hair and feel 'naked' when it's flat; I want to reproduce the height in a hat. A tall pill-box (fez) style seems most appropriate.

I will be eligible for a free wig. It occurred to me today to get one, even if to wear under my hat (as I am unlikely to find an affordable wig that matches my usual hair style).

I found these hats first. I like them but don't want to buy any of them (I don't know how long these shop links will work):

I found this amazing barn owl hat and another by the same maker via Regretsy. I think they're genius, though. 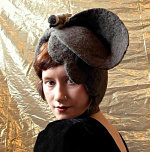 Finally, I recently found these hats: 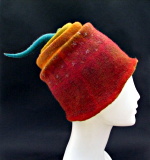 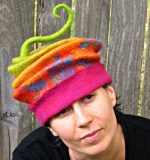 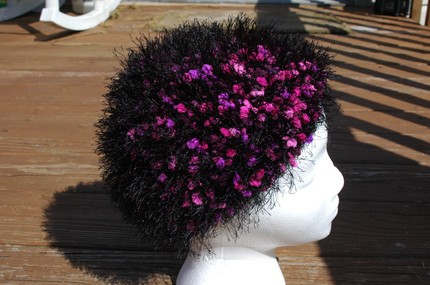 I've just now bought the crocheted hat by punkerkas that I'd favourited on Etsy. It is made specifically for people undergoing chemotherapy.

I have asked one friend[1] to make a black hat for me which I will then send to a pen-pal[2] who is an amazing beader, so that she can decorate it with flowers. I have another pen-pal[3] who is an avid knitter - when I recently saw on her blog a hat she'd knitted for a friend undergoing chemo, I asked her to knit one for me.

Finally, I will have a go at making a hat myself, a lime green knitted felt hat that I will decorate (I like these colours).

Ahhh, looking forward to my hats is where I shall leave this post.

Totally loving the hats - very you :-)

I laughed when I read your comment about the examination and the curtain. The first time Janet and I saw the oncologist, he started to move the curtain in the same way, but I moved my chair so that I was inside and just smiled innocently.

I realised after I wrote this post that the giggling could be read two ways.

Frank has been with me on all the one-to-one consultations and I'm usually examined in a side room. This was the first time that the examination area was in the same room as the doctor's desk.

I'd always thought it amusing that they took pains to give me privacy from my husband of 22 years but I never said or did anything about it.

This time, though, as I stood up to get ready, I was looking down at Frank and giggled with a little excitement because he would see me being examined for the first time. He grinned back.

The nurse was pulling the curtain and I realised that I was actually relieved, that I was feeling embarrassed. Heh.

I was once given an examination in front of Cliff where the doctor did the quick curtain thing, I laughed at that moment as well. There's something odd about the "privacy" from my partner but also embarrassed at being in a compromising position (a doctor standing over me and poking and prodding).