I've just finished my first week (5 of 18 sessions) of radiotherapy at Reading hospital. I have no ill-effects to speak of.

I'm due to have two more weeks of weekday sessions plus three days of boosters for my surgery scar.

I went in for an initial planning meeting last Monday.

Radiotherapy is a very high dose of x-rays; one has to make sure that the right bits get exposed while minimise exposure to other bits, such as - in my case, having had breast cancer - heart and lungs.

To do this, they have a specialist table-bed-board thing and a detailed procedure to record positional settings during a planning session. These settings are then applied at each radiotherapy treatment.

Firstly, I was called in for a talk with a nurse to go through what to expect. The nurse (H) had a great sense of humour. Frank and I encouraged her and we quipped our own jokes. At one point, H passed over a consent form on which, amongst other things, various side-effect checkboxes had been ticked. I asked "oi, does this mean I can choose my own side-effects? What if I want another set?"

Oh how we laughed. And, apparently, the tattoo ink colours are black, black or, umm, black. H said that, surprisingly, most people went for black. (Frank suggested blue; I'd have liked green.) 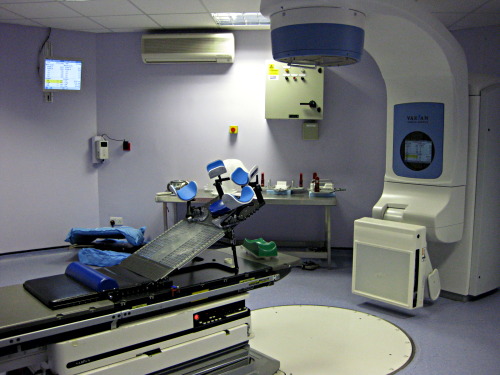 I was asked to change - that meant removing my top clothes and putting on a green robe which tied around the middle. I was then escorted into a room with a linear accelerator (LA1 in this case) and asked to lie on the table-bed thing.

It is a horizontal panel with an elevated head section. There is a blue wedge about half way and I rest my bent legs on a semi-hard red form. The head board has lots of peg holes into which arm rests, and one of three head rests, are placed depending on the person. The table can be raised and lowered or rotated.

Two sources of green lasers produced horizontal and vertical green lines across my body. I could see them in the reflection of the machine and mentioned that I looked like something from Tron, realising immediately that the young woman was too young to know the film.

The two radiographers made some marks on me in pen and read out numbers to each other, shifting me a little, while adjusting the table and machine. They then called in a doctor who was followed by a young student doctor who had I-don't-wanna-be-here body language.

The main male doctor introduced himself. I said hello but felt a bit weird being seen by someone for the first time when naked from the waist up and not being able to turn my head to make eye contact. He inspected the marks and made one of his own.

I then got my tattoo marks - just pin-prick size - and they felt exactly like I expected, like quick pin pricks! I got one on my right side, one on my chest (by three freckles - the group looks like a constellation now!) and two, I think, on the left, where I had the lumpectomy.

Before I left - and after I got dressed - I was given a sheet with my appointment times for the next four weeks. The first session would be the following Monday.

Frank came with me to the planning meeting and my first radiotherapy session. I've travelled by public transport for the rest. 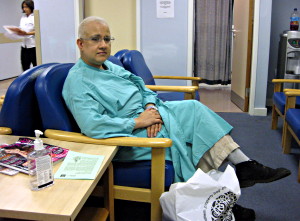 Waiting for my first dose 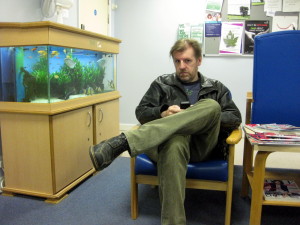 Entertained by Frank and fishes 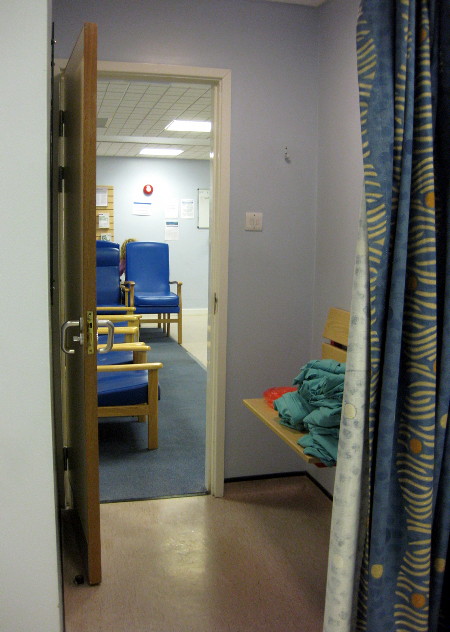 The waiting room seen through one of the changing rooms

My actual radiotherapy is on a different machine (LA3) by a different (nicer) waiting area.

The first session took longer so that the radiographers could perform extra diligence. They looked at the green lines and tattoos on my body, read out my setting numbers and adjusted the table, me and the machine.

If I am ever a millimetre or so out of alignment from what my set-up documentation specifies, they will gently push my flesh (as if it would stay) as if I was made of clay. Very interesting! I've been told twice not to "try to help" by moving and so I have learnt to just lie still and let them get on with it.

For this first time only, they attached one or two diodes to record the actual dosage level. 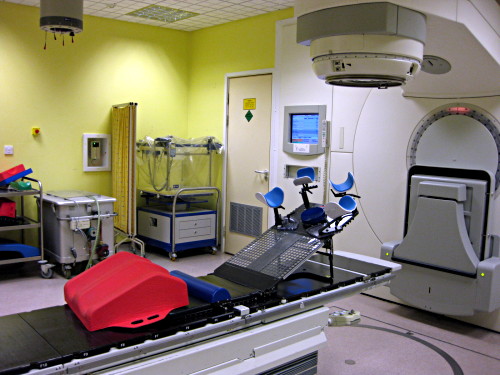 Once they are satisfied with the set-up, each radiographer reads out my name and the settings from their console. They then excuse themselves, hit a big button on the way out and then I wait.

A big light on the wall, which is initially off, clicks on yellow for a few seconds. It then turns red at the same time that a buzzing alarm sound starts with accompanying clicks.

The first dose was about 10-20 seconds. There is no sensation whatsoever.

The radiographers return to reposition the table and the machine arm for the second dose administered from above; the machine is rotated to just by my head to the right. I am left alone again and wait for the red buzzing clicking. 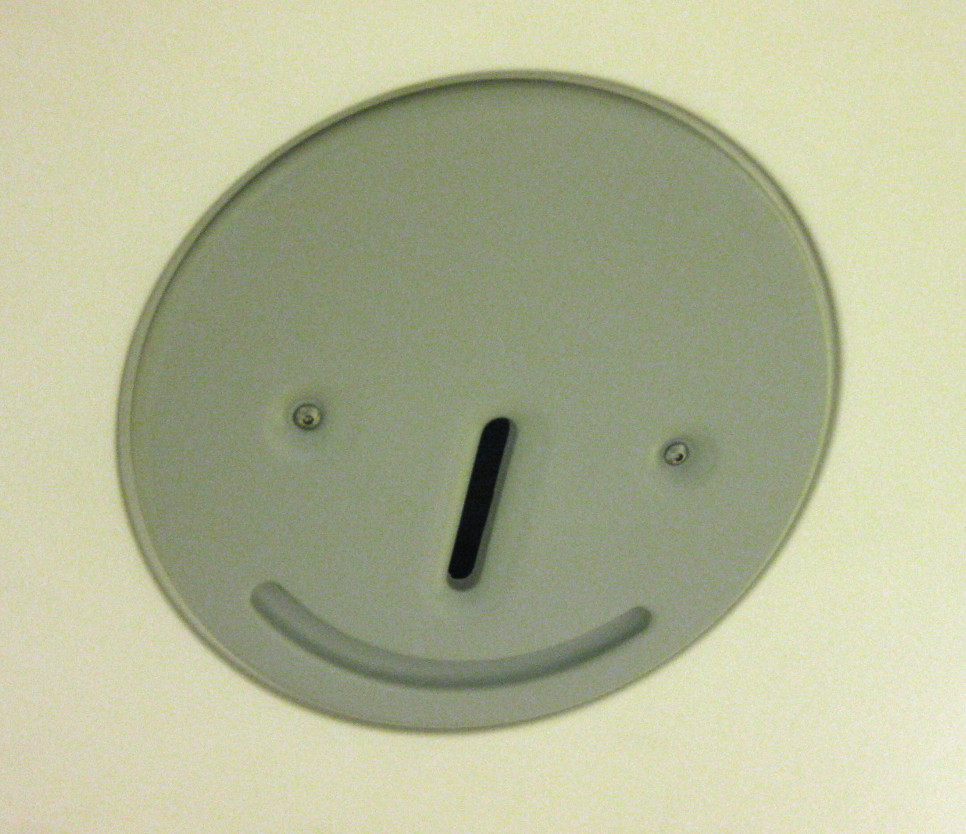 A single radiographer then returns to lower the table so that I can get off. I return to the changing rooms to get dressed and leave. I am usually in and out in 15 minutes.

The arm of LA3 has a great smiley face on it. It's where the alignment lights come from.

The waiting room seats about 15 people. A couple of times this week, I've stayed for half an hour after my session to talk with people. I've heard a couple of horror stories in the last two weeks. One was about a near-fatal mistake involving anaesthetic and another about being fobbed off by a GP for a year before being diagnosed with cervical cancer.

I love talking to people to hear their stories but it is very worrying to hear of such serious mistakes when I have chosen not to worry but to put my faith in the system.

That said, I still think that I have been very lucky and, each time I hear these kinds of stories, I am glad that I'm not the one telling them.

I don't like Reading hospital. There is a something about it which is oppressive. The staff are wonderful and so I think that the building is the problem. It seems to be a maze of yellowed corridors and areas of bleak darkness. It feels like the walls are coming in to engulf me.

I was grateful when I found out that my radiotherapy was in a different area to where I had my planning meeting. The waiting room by LA3 is brighter and less cluttered. 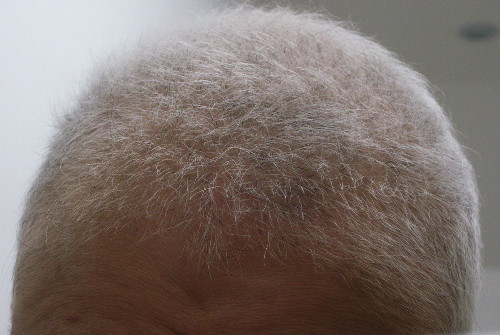 The hair on my head is returning steadily.

It's still very soft and more black is coming through (although there is still more white). People had said that, after chemotherapy, hair could grow back frizzy or different colours but mine seems to be coming back the same as it was before.

My eyebrows are returning with a vengeance.

At the end of the world the only that will be crawling over the world will be cockroaches and my eyebrows, the latter as writhing monsters as if from an old Star Trek episode.

What I am afraid of

I haven't talked here at all about being scared or afraid but there is one thing that has crossed my mind a couple of times: how I will feel if I am diagnosed with cancer again.

I feel lucky with how things have gone since I found the lump in January, that I have got away with it. But with that thought comes the highly irrational thought that, if the cancer were to return, it'd be much worse.

There's no logical reason for secondaries or a new cancer being worse; it's not as if there is a Cancer Balance, that because I was lucky this time that I'll be unlucky the next time. If I am vigilant and can spot problems early, I could still only get an early stage tumour again.

If there is a next time, there will be a difference in that I will know what to expect.

There is a lot to be said for blissful ignorance when it comes to medical treatment. I've only been interested in the next appointment and I haven't looked beyond.

However, I no longer balk at the thought of more chemotherapy. Whereas, after my second chemotherapy, I thought that I didn't want to have any more, I now think I could stand to go through it all again.

The other thing I am afraid of is a sudden bolt of realisation of what has happened to me this year, that I finally break down and cry. I haven't cried this year or had any kind of upset or life-changing episode since finding the lump. I hope it's not all bubbling away somewhere inside.

I visited the Macmillan booth near the entrance of the cancer centre at the hospital today, where the radiotherapy departments are. I spoke to the two volunteers (I'd gone to ask about travel insurance options) and they gave me some leaflets and booklets after a great chat.

I read the general radiotherapy booklet on the train home. There was a paragraph on how radiotherapy marks the end of treatment and that people sometimes need more support then.

I hadn't thought about feeling alone and uneasy after trips to the hospital had finished, but I can easily see it happening; for the last eight months, my focus has been on my treatment. After radiotherapy, it'll just be hormone therapy and the occasional screening.

I have had four different radiographers this week (they work in pairs). I started thinking today about what kind of jewellery I'd make them for their thank-you gifts. Oh, and something for the very fun H we met last week.

I look forward to getting to know them all a little better - I can only grab 30 secs chat time with them before they start their set-up number-calling routine - so that I can make something special for each one.

I also need to find out when I will last see the oncologist for the last time until my next check-up (in months or years?) so that I can give him something.

And, last but not least, I will be making something lovely for the five Breast Care Nurses at The Parapet in King Edward VII hospital in Windsor.

« previous
August update
next »
The end is nigh

Glad it is all moving forward nicely - the radiation sessions do go quickly don't they?

I started having these questions and thoughts too as I entered the stage after the heavy treatment and was directed towards this article at cancercounselling.org.uk, I found it really helpful.

Thanks, FBG, that was a very useful article.

I just wanted to say that I am still reading although I don't tend to comment. You've helped me to gain a lot of insight into a process that I've never really understood.