So, nine days ago I had a 27mm lump and some lymph nodes removed from the left side of my left breast.

At least, THAT'S WHAT THEY TOLD ME.

With no ill-effects from the anaesthetic, no surgery pain (except the sharp tugging of skin by the dressing) and no restriction in movement, it crossed my mind more than once that it was a conspiracy, that I hadn't actually had any surgery.

I had regained consciousness in the recovery room with a taped up and hoisted left breast, various puncture holes on my chest and hands, and splatters of blue dye up my left arm. I figured that my breast must have tried to fight back when they injected my nipple with the dye under anaesthetic that afternoon.

However, on removing the outer - pressure - dressing two days later, there was no denying it: SOMETHING must have happened. My left breast, whilst still the same shape as before, was now a tad smaller than my right breast.

So, okay, I must have had surgery and they must have taken something out. (Or else I had a tit lift? I ain't complaining.) I experienced my first inner soreness last night and this morning there was a large swelling where my lump used to be.

Should I be worried?

I didn't know. And that worried me. 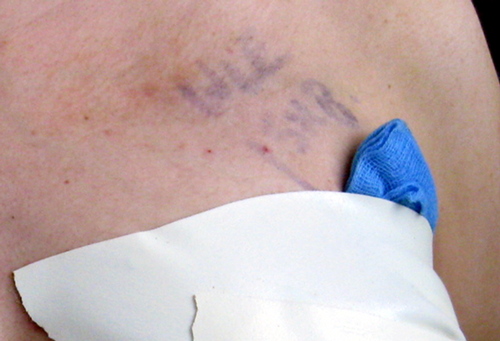 Anyway, to catch up, there was minor excitement when I took the pressure dressing off two days after my surgery. I'd completely forgotten that I was supposed to take it off - Frank reminded me.

It was like being covered in duct tape (oh, and you see where the nice-shoed surgeon had drawn a large arrow on me? WLE = wide local excision, SNP = sentinel node biopsy). Removing it revealed the surgical dressing which just looks like a massive plaster, but with a wider sticky border.

The top sticky bit had somehow rolled over, exposing a section of crumpled stickiness that I knew was going to slowly wear away the dressing by sticking to my clothes.

There was still a stuck-down border around the dressing and so I covered the rolled-over section with one of my own plasters. I hesitated doing this because various nurses had referred to my surgeon along the vein of "Miss P feels very strongly that patients should ..." and one edict had been "Miss P feels very strongly that patients shouldn't go anywhere their dressings, not touch it, nothing." I imagined a telling-off or, at least, a disparaging look when she would eventually see what I'd done.

I changed my plaster the next day, when it got wet during my morning shallow baths that I'm now taking (with HiBi scrub - for MRSA - which warns against contact with the brain).

The plaster didn't get wet the next morning and so I left it on. It got wet the third morning. I started to remove my plaster - pulling up from the lowest corner - and was aghast to see it start to lift off the surgical dressing, creating an air gap all the way from the edge to the dressing!

I decided to walk to the hospital for advice. I called ahead; being a Saturday, the Short Stay Surgery Unit was closed. The receptionist suggested I go to the Minor Injuries Unit instead.

And that's where I went, curious to see what it would be like; I expected an emergency room, with blood gushing and broken limbs. Instead, I saw a different mix of people than I normally see around here. Not a drop of blood was in sight and no one writhing in agony. A television blared out loudly in the waiting area whilst I read a magazine about Women and Health to pass the time in what ended up being a 75-minute wait.

When it was my turn alone with the practice nurse, she had a look at my dressing and carefully removed the plaster. She said there was no sign of infection (heat, redness, seeping) and that the surgical dressing looked fine (of course, the unit didn't have the same kind of surgical dressing to replace it).

She covered the dressing with a bigger less-sticky dressing and gave me a spare, just in case.

She asked how I found the lump and I said from self-examination and that the only friend who'd asked me - she was in her 30s - had never ever examined herself for lumps. The nurse said "perhaps she will start now." I hoped so.

Yesterday, a friend who'd had leukaemia drove over 60 miles - here and back - to deliver two large home-made vegetarian lasagnes. He said that his friends had brought over cooked food after his bone marrow transplant as they appreciated that he had other things going on that would detract from preparing proper meals.

I was surprised and really touched - I fleetingly felt guilty that I wasn't bed-bound whilst being glad that I wasn't. I later realised that I actually hadn't cooked since the surgery and that I'd been getting a lot of ready meals.

I told him, as I'd been telling everyone else, that I hadn't had any pain from the surgery, that I felt fine. (I'd felt a small swelling where my lump had been but it wasn't sensitive to the touch.)

That night - last night - was the first time in over a week that I felt sore, inside, where the surgery had been. This morning, I was still sore and the swelling seemed much larger, about two inches wide.

It feels entirely different to the initial lump, which had a distinct shape (oval), but this swelling is indistinct in shape like, umm, a swelling. I could also see it in profile when lying down.

I lay there a few minutes, wondering whether to wake Frank to tell him or whether to go back to sleep. Frank got up and I did too.

I told him I was worried about something and asked what he thought I should do. He frowned, looking concerned. What was disconcerting was not knowing whether this new thing was something I should worry about. And the not knowing was worrying.

I resolved to call my Breast Care Nurse. I was opening post at the time but dropped it mid-way and went to fetch the card of the nurse who'd called me for a follow-up yesterday; all my clinic appointments had been Wednesday afternoons and so I figured I should call while it was still morning.

The nurse I asked for by name was seeing a patient and so I explained the situation to the Breast Care Nurse who had answered the phone (I know that there are five in that clinic - I'd met two).

She said it was very likely a seroma - a collection of fluid which is normal after the kind of operation I'd had. She said it was nothing to worry about - a normal reaction - and that the body eventually reabsorbs the fluid. If it grew so large as to hinder movement or cause pain from getting knocked, I could come in to have it looked at and possibly drained using a needle.

As she was talking, I remembered that I'd been told about seromas before in one of my visits or from one of the many pieces of paper I'd been given. I thanked the nurse and hung up, very relieved and extremely grateful that I have patient nurses at the end of the phone.

I went to tell Frank what happened, saying I'd since remembered being told about seromas before.

Frank said, "don't feel guilty about phoning them - that's what they are for."

And I realised that I probably wasn't the first person who'd called them while they were in Should-I-Worry? mode, too anxious to go through an archive of printed information. I could have RTFMd, but I didn't.

« previous
Chapter 4: Getting the biopsy result
next »
Chapter 5: Best news ever