In three days, I will have my last FEC chemotherapy.

It's my birthday tomorrow and I've asked for flowers to cheer me up during the period following chemo of nausea and glum. (The other request is for fruit and tomatoes to dry in my new food dehydrator).

Three weeks ago, I'd been given overlapping appointments - chemo and with the oncologist to hear about radiotherapy. After a bit of confusion that morning with calls, we went to the Parapet, the breast cancer diagnostic centre I went to originally, to see the oncologist.

I will start radiotherapy in Reading hospital in September. That leaves August treatment-free, except for the side-effects of my last chemo. I will have 18 sessions on consecutive weekdays. I knew from reading another blog that each session is 15 minutes of alignment and just 2 minutes of the radiotherapy, which is (like?) a high-energy x-ray.

First I will have a planning appointment so that the machine can be specifically aligned to my body and the area needed to minimise the exposure of my heart, lungs and bones to radiation. I will get three small tattoos on my breast (chest?) that will be used in the alignment process. I was told to get a fitted bra - which I will get refunded - as this will hold me in place but be cut by the radiotherapists and, I guess, what I will wear during the sessions.

I didn't write it down but I think he also said that I will start hormone therapy about the same time (as my tumour was sensitive to oestrogen and progesterone).

There are short- and long-term side-effects to radiotherapy. I knew about the obvious sun-burn effect and possible blistering. I was advised to use a non-perfumed aqueous cream twice daily. I must avoid anything that will further irritate my skin on that side, such as deodorants or perfume, and I mustn't shave my underarm. I should wear natural fibres and a soft bra to avoid chafing. It all makes sense.

The long-term side-effects can include skin changes such as darkening, thickening or a shrinkage.

There are also some very serious long-term side-effects due to the heart, lungs, nerves and bone being within the radiotherapy zone - explained by the oncologist and in the booklet. They are rare (1% of patients) and there's nothing I can do to prevent them. I shall therefore not blog about them or try to think about them.

The previous chemotherapy went okay. I took my camera so that Frank could take photos of the dressing procedure from start to finish. 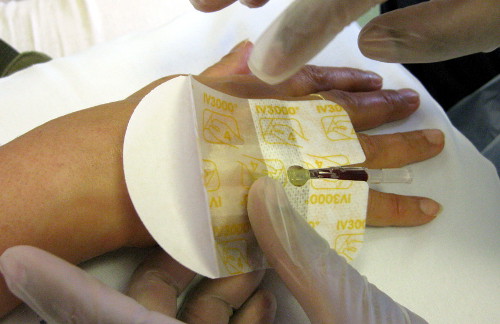 As usual, we spent most of the time either chatting with the nurses or the other ladies having chemo.

One lady was having her first chemo. After the pharmacist left her the big bag of medications, I gave her some advice about the extra anti-sickness pills. I'd switched from Domperidone (to take before eating) to Prochlorperazine which is a buccal type; you put it under your lip against your gum so that it slowly dissolves and does its stuff. It works within minutes but, as it dissolves, it tastes foul and so I chew some gum at the same time.

The lady in front of me had nice sandals which I commented on. She told me that she had inoperable cancer - against her chest wall - and had been having chemotherapy since October EVERY WEEK in order to shrink her tumours. I asked her whether she felt that her life was in limbo and she said she did. She seemed to be taking it in her stride. How awful.

The nausea and glum feelings lasted longer after my last chemotherapy - about 10 days - but neither was more severe.

I set an alarm the first few days to remind me to eat regularly to pre-empt hunger-mutated-as-nausea. I have cut out lactose completely but sometimes get slightly nauseous after eating - it might be sugar or butter, I'm not sure. Or perhaps it's inevitable. It's not bad enough for me to experiment to find out.

I get tired in the afternoon and evening and sometimes take naps if I feel I just can't stay awake.

I have blood - fresh and dried - under my big toe nails. The oncologist and GP that I was advised to see were both bemused about it. Nail problems are usually a side-effect of the strong chemotherapy drug, Taxotere. I just have to keep an eye on the bleeding toe to make sure it heals quickly and doesn't get infected.

My hair started growing back several weeks ago. It's about a centimetre long, mostly white, very thin and soft. There are about a dozen long hairs remaining that have survived chemotherapy.

The loss of my hair turned out to be less of a deal than I expected, and I hadn't expected to worry about it much anyway.

It's been nice and cool in the hot weather and I have had lots of nice scarves and hats to wear when I go out. I donated my black wig to Cancer Research UK and the two black felted hats that Becky kindly made for me to The Parapet. I will keep and continue to wear the purple and green hats she made for me.

Plans for the week

It's my birthday tomorrow. I will be hosting this month's cake club with my friends who were my neighbours at my previous house in the next village. We take turns hosting a tea and cake afternoon. I will be baking two milk-free cakes I've not made before: a chiffon cake and a génoise.

I will also have my pre-chemo blood-test tomorrow, Monday, as my last chemotherapy is on Wednesday.

I will make jewellery to give to the four chemo suite nurses on Wednesday, and for the (up to) seven people who will have be having chemotherapy at the same time.

It'll be the first time I'll give thank-you gifts to medical staff in person. And it's because there will be a fuss made over them that I wanted the onlookers also to get a surprise and receive little gifts too, hopefully to brighten their day.

I figure that I will have about 10 days of annoying chemo side-effects but this time knowing that it'll be the last time I go through them. I have lots of things to do to distract me during those days.

After Wednesday I'll post photos of the jewellery and, hopefully, of some of the people.

See you on the other side!

« previous
How to reduce sickness during chemotherapy
next »
Chemotherapy & gifts

Hi Paola. Congrats on finishing chemotherapy. Hopefully that's the worst of it over with.